5 ways the coronavirus has changed tournament golf, as noted at a real live pro event 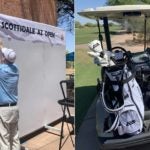 A few photos snapped by the author at the Scottsdale Open.

SCOTTSDALE, Ariz. — After 18 holes at the Scottsdale Open — the biggest golf event since the Players Championship was canceled in early-March — it’s clear that tournament golf has been changed by the coronavirus. Here’s what we noticed strolling the grounds in the first round.

1. The post-round handshake is dead

A handful of fist-bumps were spotted, as well as a few awkward elbow-bumps, but the meaningful head nod is now the coin of the realm.

2. Whether or not to putt with the pin in has become an even more fraught decision

Competitors were provided with paper towels should they want to remove the pin but few used them. I saw the flagstick touched by bare hands, gloved hands, golf towels and even the flag itself, wrapped around the metal. Few players sterilized the flagstick after replacing it but many did employ the hand sanitizer upon leaving the hole.

At many courses nationwide, and preceding tournaments on Arizona’s Outlaw Tour, rakes have been removed and “preferred lies” put in play. Give a pro golfer a clean lie in a bunker and it’s usually an easy up-and-down. “Now I actually have to aim away from the bunkers,” said pro Nick Mason, only slightly sarcastically. The Scottsdale Open planned to provide individual rakes to every player in the field but the dozen or so diehards who walked instead of riding in a cart in 94-degree heat declined to drag along a rake. And when the supply ran low, groups that teed off later in the day were given only one or two rakes to share. These appeared to be sanitized even less than the flagsticks. The PGA Tour may have the resources to employ designated rakers but at every other level of the game preferred lies is probably the way to go.

4. Tournament golf with no fans exudes a *very* different vibe

It’s lonely out there! That’s not too different than a typical first-round vibe at the Scottsdale Open but it is going to feel strange at Tour events. “You have to create your own energy now,” says Alex Cejka, the Czech legend who in recent mini-tour starts has been tearing up the desert like Johnny Miller circa 1975.

5. More wives, girlfriends and assorted others are on the bags

Most of the players did not employ caddies, unsurprising at a tournament with a $130,000 purse. But with no spectators allowed on the grounds a handful of pros guaranteed themselves at least one friendly face by having a significant other serve as their caddie. When the PGA Tour returns to action, no family will be allowed on-site for at least the first four events. Expect more than a few players to turn their wives or girlfriends into caddies in the short-term so they can enjoy some comforts of home.