Inside the Scottsdale Open, a mini-tour event that this week has a big-time feel 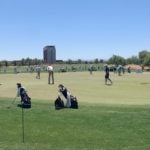 Players were eager to tee it up on Tuesday at Talking Stick in Scottsdale.

SCOTTSDALE, Ariz. — Tour players with slender carry bags. Untucked polos. Biggie Smalls blasting during the pro-am. A live-stream with mid-round questioning of the players. Logo-free hats, Vegas betting lines, a $130,000 purse…this week’s Scottsdale Open is a mini-tour event that has gone big-time, with all the culture clash that suggests. “Some of these guys are rolling up with a 42-ounce Polar Pop from Circle K, other guys are grinding on the practice green with their chalk lines and putting aids,” says Joel Dahmen, the PGA Tour vet who is 70th in the World Ranking. “It’s a different vibe, for sure. It’s kind of refreshing, actually.”

The Scottsdale Open is enjoying the extra juice because it is the only game in town. With pretty much every other professional golf circuit shuttered, 162 players each paid between $795 and $1,095 (depending on how early they signed up) to enter the event, knowing that if they are among the low-50 to make the cut but finish at the bottom of the pack they might not win enough to cover the entry fee. (First place pays $20,000.) Players like Dahmen, Kevin Streelman (two PGA Tour wins, $20.2 million career earnings), Kirk Triplett (eight Champions tour victories) and PGA Tour winner Nate Lashley live locally and are here to have a little fun and use the Open to get needed reps for bigger things to come.

But for a true mini-tour lifer this is a priceless opportunity. “Give me a chance to beat a PGA guy, I’m into it,” says Dakotas tour legend Andre Metzger, who on Tuesday shot an opening-round 65, three shots off Lashley’s lead. “You want to play against the best and measure yourself against the best. I was way more nervous on the first tee today because this one means more than the typical mini-tour event.”

The leaderboard is top-heavy with Tour talent, as Dahmen, Streelman and Scott Harrington are tied for fourth place with matching 65s, along with Colt Knost, emerging from his recent retirement. In a world mostly devoid of professional sports, Las Vegas has suddenly taken a new interest in mini-tour golf and Dahmen, coming off a casual 58 with friends last week, was installed as a 6-1 favorite, which he describes as “ridiculous.”

In the first group out on Tuesday, Dahmen said he played “10 average holes and eight good ones.” He admitted to slight discomfort at being treated like one of the marquee players. “I feel it’s…different,” he said. “I can show up and I’m a nobody at Tour events and that’s kind of nice. It’s a little different and now I know how the big guys feel. I don’t know if I like it that much.”

Meanwhile, his playing partner Lashley came in with very different expectations. Of his flawless round, which included six birdies and an eagle on a still day at Talking Stick, Lashley said, “I’m very pleasantly surprised. I haven’t really been playing.” He added, “It just feels good to be out here again, competing.”

Like the Outlaw Tour and Cactus Tour, the independently operated Scottsdale Open was able to proceed under Arizona’s permissive rules and regulations toward the coronavirus. No spectators were allowed on the grounds but Talking Stick is a 36-hole facility and, with the other course open to the public, curious hackers milled around the clubhouse area, watching the pros play. The plan was for every player to be issued his own rake, to be carried in a single-rider golf cart. (Grateful for the company, Nick Mason named his rake “Steve.”)

A handful of tournament officials roved the course in carts, occasionally reminding players to follow the safety protocols, but ultimately it’s each individual’s responsibility and compliance varied. Daniel Miernicki anointed himself the sole flagstick-minder in his group and after every hole dutifully cleaned both his hands and the pin. Many other players were similarly vigilant. Taylor Montgomery, meanwhile, accidentally left his rake on the third hole and never went back for it, opting to borrow one from his playing partner Sam Saunders. “It’s fine, him and I are both corona-free, we feel like,” Montgomery said. Did he sterilize the handle of the rake before giving it back to Saunders?

“I didn’t see any sanitizer out there,” Montgomery said.

Wasn’t his group given a bottle on the first tee?

Lashley was similarly relaxed about the virus, saying, “It’s not something I’m overly worried about right now. If you get it, you get it; you get through it and move on with your life. At this point, here in Arizona I don’t personally know anybody who has been affected by it, so for us to come out and be extremely precautious feels like it’s a little overblown.”

Given that this is the biggest golf tournament anywhere on the planet since the Players was cancelled in mid-March, the overriding feeling around Talking Stick was joy, tinged with relief. “I did this just to have a bunch of fun,” says Streelman, who packed a brown bag lunch for Monday’s pro-am. “I practiced here at this course when I was on the mini tours 15 years ago. It’s down the street from where I live. I just wanted to get some reps in, get some putts that mean something. I’ve missed competitive golf.”

The next two days will tell the tale not only for Streelman and his PGA Tour brethren but also for all the mini-tour grinders who hope to join them someday. The humble Scottsdale Open has unexpectedly become a key part of the journey.