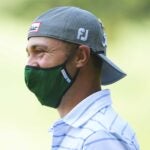 Justin Thomas during the third round of the Tour Championship in September.

Ed. note: GOLF senior writer Alan Shipnuck is counting down the six most impactful and enduring stories from a golf year that was at once weird and wonderful, unnerving and uplifting. We begin with the PGA Tour’s decision to play on, and how its players came together to power golf’s return after a three-month hiatus.

It’s easy to forget now, but back in June the PGA Tour’s season was on the brink. The coronavirus pandemic had wiped out three months’ worth of tournaments, forcing the Tour to rejigger its schedule and enact a series of new safety protocols for a movable feast that travels to a new town each week. Golf was one of the first professional sports to return in a changed world, though the second tournament after the restart landed in Hilton Head, where the locals were still partying like it was 2019, and players and caddies were also still acclimating to the new standards.

The following week, as the Tour reached Hartford, the chickens came home to roost. Among the handful of players forced to withdraw because of the virus were headliners like Brooks Koepka, Webb Simpson and Cameron Champ. “That gave all of us a pretty big wakeup call,” Collin Morikawa says of the spate of withdrawals.

Then something beautiful happened: a tour of rugged individualists came together for the greater good. Players and caddies began aggressively policing each other’s behavior and following more stringent rules that the Tour nimbly put in place. “The whole organization had to dig really deep to get this show back on the road and to keep it going,” Adam Scott says.

Commissioner Jay Monahan, who froze his salary while tournaments were shuttered, deserves much of the credit but reflexively shares it, saying, “It took a tremendous team effort to make this work. There was buy-in from the entire Tour community. I’m just incredibly proud of the way we all came together to create a safe environment for the players to showcase their talents and deliver tremendous entertainment to the fans at a time when they really needed it.”

What happened between the ropes in 2020 will long resonate.

Dustin Johnson emerged as a player of historical importance, with a record-smashing victory at the Masters preceded by a run of wins that landed him the FedEx Cup. Before Johnson put a stranglehold on the top spot in the World Ranking, other emergent talents got a taste of being number one: Justin Thomas, 27, whose explosive game carried him to a pair of marquee victories; and Jon Rahm, 26, who has matured into a threat to win every time he tees it up. Rahm’s walk-off 66-footer to beat Johnson in a playoff at the BMW Championship was one of the highlights of the restart, which featured a series of outrageously clutch putts.

Collin Morikawa, 23, won the PGA Championship with a thrilling Sunday charge while and Matt Wolff, 23, contended to the bitter end at both Harding Park and Winged Foot, moving to the front ranks of a pack of extravagantly talented young players.

Meanwhile, Bryson DeChambeau used the Tour’s sabbatical to bulk up and then, once the competition restarted, redefine our notion of how the game can be played, infusing a sleepy sport with stunning athleticism and the edgy rebellion of the iconoclast.

“I think this year has set up the Tour for the next generation,” Scott says. “Seeing these young guys break through is great. The standard of golf right through the Tour is incredibly high. In Las Vegas the cut was seven under par, and there have been a lot of five-under cuts throughout the summer — it’s unheard of week after week. The standard is incredibly high because everyone is incredibly professional and pushing themselves to the limit.”