First Round Back: What it’s like to play Pebble Beach in the Covid era 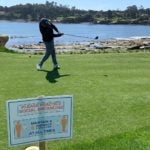 Pebble Beach re-opened for business on Monday, but with stricter guidelines than before.

Ed. note: The economy is reawakening, and so is golf. As states begin to loosen restrictions on the game, tee sheets at America’s courses are filling up again. To help chronicle this process and illuminate how the coronavirus pandemic has changed the game in ways both large and small, we’ve tapped our fleet of writers and editors — who are spread out across the nation, from New York, to Arizona, to Texas, to California — to document their first rounds back.

PEBBLE BEACH, Calif. — At first blush, Monday felt like any other day around Pebble Beach Golf Links — the staff was gracious and welcoming, the emerald golf course perfectly manicured, the ocean glittering. But the first sign of the times was tucked into the plastic bag that every golfer received upon check-in: along with a snazzy metal bag tag and logo’d pencil there was a baby-blue facemask.

This is the new normal, and even Pebble Beach is not immune. On Monday, play finally resumed on America’s grandest golf course, after six weeks of eerie emptiness. This was cause for both celebration and concern. The masked-and-gloved staff was a stark reminder that there would be no respite from the changes that Covid has wrought. The practice putting green and pro shop are closed (payment has to be done electronically in advance), rakes removed from the golf course, and flagsticks remain in at all times, with an attached pool-noodle recessed into the cups. Carts cannot be shared, making the most social of games less so. Masks are encouraged whilst milling around the first tee or placing an order at the halfway house but otherwise it’s okay not to wear them.

Despite the minor inconveniences four dozen golfers turned out under crystalline skies. They were greeted by the purest Pebble imaginable, with nary a divot or pitch mark in sight. There was an unmistakable giddiness in the air. The 10:20 tee time featured three gents who had driven down from Santa Cruz. Their slouchy attire, frayed golf bags and outdated gear did not peg them as the quintessential Pebble Beach clientele. One of the men said he’d been wanting to play Pebble for “50 years” and finally decided to take the plunge. “Life is short,” he said and then he added some airtight reasoning: “I haven’t spent a dollar on golf in over two months so why not?”

Indeed, Pebble has never been more attainable, if you can swing the admittedly pricey greens fees. The pre-Covid policy mandated that to make a tee time more than 24 hours in advance a room had to be booked at either the Lodge or Spanish Bay, at a sum that equaled or exceeded the $575 greens fee. But with both hotels closed until at least early June tee times are now up for grabs at the, ahem, reduced price of $495.

I teed off at 11 with a trio of Silicon Valley dudes — Christian Russell, Ronnie Otero and James Webb — who had driven down that morning; they have already booked six more Pebble Beach tee times for May and early-June, paired with rounds at Spyglass Hill (now $325, down from $415). Behind us was a father and son, playing all by themselves. The kid looked to be about 9 years old. He had a sweet swing but couldn’t carry it more than about 120 yards in the air. In the old days — which is to say, early March — foursomes inexorably teed off at Pebble Beach every 10 minutes, and there might not have been a place for a little kid just learning the game. But, suddenly, this is the perfect time for a bucket-list experience.

I’ve been playing Pebble Beach since the early ’90s, when I worked there as a cart boy, and I’ve never seen the course in better shape. This was my first golf of the corona era and I felt utterly blissed-out, especially after birdies on the 4th and 6th holes. (It is bittersweet not to hear a putt rattling around the bottom of the cup.) A group we crossed paths with a couple of times was lustily celebrating every success and that made me smile.

But there were melancholy moments, too. The mostly empty course and shuttered Lodge were emblematic of the brutal challenges that the golf tourism industry now faces. Pebble Beach Co. is one of the largest employers in the area and furloughs, pays cuts and eliminated jobs have had a profound effect on hundreds of families. Spanish Bay and Del Monte remain closed and the company’s caddie program is still shut down, scattering hundreds of loopers to the wind. It was weird to finish on 18 all by ourselves in utter silence — no tourists snapping photos, no tales noisily being told around the Lodge’s outdoor firepits.

With the Tap Room closed a cherished post-round tradition is unavailable. Christian, Ronnie and James took off while I milled around the 18th green, taking a few photos and enjoying the view. I was heading to my car when I bumped into them again…on the 1st tee. They were headed out for another, previously unplanned 18 holes. “How often do you get Pebble Beach all to yourself?” James said. “Hey, you gotta do it.”