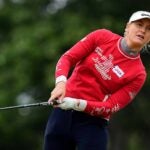 “As part of the LPGA Tour’s Covid-19 testing process, I was informed this morning that I tested positive for Covid-19 and I have withdrawn from the ANA Inspiration,” Hull wrote.

She first started feeling symptoms on Monday, initially dismissing them as complications from travel and the searing heat that has greeted competitors at Mission Hills Country Club in Rancho Mirage, Calif., before her test came back.

“I didn’t feel great yesterday but I put it down to jet lag, the heat and my asthma playing up,” Hull wrote in the statement. “I now realize I have some mild symptoms which feel similar to having a cold and I am self-isolating and working with Tour on contact tracing.”

She added, “I am very disappointed to have to withdraw from what is one of my favorite events of the year but wish everyone the best of luck at this week’s tournament and look forward to when I can return to playing on Tour.”

The 24-year-old pro won the LPGA’s CME Group Tour Championship in 2016 and has two Ladies European Tour victories on her resume, including the 2019 Fatima Bint Mubarak Ladies Open.

Currently ranked 28 in the Rolex Women’s World Golf Ranking, Hull has represented the European Team in the last four Solheim Cups, compiling an impressive 9-3-3 career record at the biennial team competition, especially considering she’s only been on the winning side twice.

Hull, who has three career top-10s at the ANA, last appeared at the AIG Women’s Open in late August, where she missed the cut. She will now quarantine for 10 days in California before being reevaluated by the LPGA’s medical team.