A 9-point checklist to playing golf safely during the coronavirus 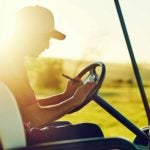 Before you hit the course, go through this checklist.

It’s the same great game, just played with new precautions. As golf courses reopen around the country, golfers will be called upon to make (modest) adjustments. Here’s a 9-point checklist for getting back out safely without missing a step.

Easy now. No one’s going to make you wear one while you play (though we should note, we’ve tried it, and it’s really not a problem, unless you’re wearing glasses, which fog up). But many courses will insist that you cover up around the clubhouse, and in any other places where you’re likely to interact with staff.

This is something you probably should have been doing all long. Now you have all the more reason to do it. To reduce potential touch-points, courses have eliminated drinking stations. Fill a bottle up at home and stash it in your bag.

Now is not the best time to be borrowing a tee from a playing partner, or scrounging for a broken one on the ground. So grab an extra handful before heading to the course (we know you’ve got a lifetime supply buried in a closet or a drawer somewhere). While you’re at it, pack an extra sleeve of golf balls, too.

4. Consider a Push Cart or a Carry Bag

In most cases, riding is now restricted to one golfer per cart (if you’ve been quarantining with your playing partner, you can ride together). As a consequence, golf course cart fleets have been getting depleted quickly, so you can’t always count on being able to rent a buggy, or even a trolley to push around. If you’re used to walking and carrying, this won’t be an issue. If not, though, it might be worth investing in a collapsible push cart or a lightweight carry bag.

Many courses are still offering food and beverage, but with limited menus and for take-out only. And at many courses, beverage carts are no longer patrolling the grounds. While we encourage you to support your local operator, you might want to show up with a sandwich or something else to nosh on, in case you can’t get a hot dog at the turn.

Yeah, we know. Since you rarely miss a shot, you rarely have to worry about playing from the sand.  But just in case, take note: courses have removed their bunker rakes, so you’ll need to learn a new method for smoothing out the sand.  The simplest solution is to do it with your shoes (there’s precedent for this at such highfalutin places as Pine Valley, a longstanding rake-free operation). But since golfers love gizmos, you might prefer to carry a mini-rake with you. Yes, such things exist, as do ball retrievers with rake attachments. Both are available on Amazon. And both fit neatly in your bag. Of course, because the golfers playing ahead of you probably won’t be raking, there’s now a better chance that you’ll draw a funky lie in the sand. Not to worry: a USGA local rule allows for free relief in bunkers when you’re faced with abnormal courses conditions, and if current conditions aren’t abnormal, we don’t know what are.

Handshakes, fist-bumps and bro-hugs are out. Backslaps are also a bad idea. What’s true at the grocery applies on the golf course: maintain at least six feet of distance between yourself and others. That’s relatively easy on the fairways, but it requires more effort on the tees and greens. Not much effort, mind you. A good way to go is to take the tee box one by one. Don’t step up to peg it until the golfer before you has stepped off. On the green, something similar applies. Each player putts continuously until they’ve holed out. Heckling your partners is still permitted, provided it happens from a healthy distance. Oh, and always leave the flagstick in.

Though most courses now keep hand sanitizer by the check-in counter, it doesn’t hurt to carry a small bottle of the stuff in your bag. Sanitizing wipes will also do the trick. Think of them as an upgrade on a towel.

9. Condition yourself to the New Conditions

This isn’t about safety. It’s about perspective. The course that you go back to might not look the same as it did before the shutdown. The greens might be slower, the fairways shaggier, the tees a little rough around the rims. Faced with threadbare budgets and skeleton work crews, many courses have been forced to cut back on maintenance, so unless you play exclusively at elite clubs, not everything you see will be primped and spit-shined.

Don’t let that bug you. Take a deep breath and consider that Augusta-pure course setups are a modern invention, not the way conditions were always meant to be. In that sense, recent changes represent a reset. They’re also a reminder of what really matters. You’re playing golf again, which, as long as you’re going about it safely, is a whole lot better than sheltering in place.