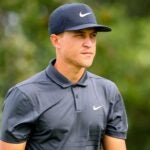 Cameron Champ pictured in August at the 2021 Northern Trust at Liberty National.

The rising surge in Covid-19 cases across the United States has struck the PGA Tour.

On Tuesday night, the PGA Tour announced that Cameron Champ had tested positive for Covid-19. The unfortunate test result forced Champ to withdraw from this week’s 2022 Sentry Tournament of Champions, the first PGA Tour event of the new year.

“Cameron is naturally quite disappointed not to be able to return to action in Maui,” Champ’s representative said in a release. “Thankfully, however, he feels good and we were able to confirm this breakthrough case whilst he was still at home in Houston.”

Champ was set to be one of the 39 competitors teeing it up this week at Kapalua, in the year-opening event that features only players who won PGA Tour events in the previous season.

Champ earned his spot in the tournament with a two-shot victory at the 2021 3M Open in Minnesota last July. The win was the third of the 26-year-old pro’s career.

The field will now be reduced to 38 players. Champ was set to tee off alone in the first group on Thursday at Kapalua’s Plantation Course. As of now, the rest of the tee times will be unaffected, with the pairing of Garrick Higgo and Joel Dahmen now opening the tournament at 2:40 p.m. ET.