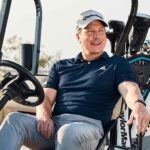 Rick Sessinghaus has been working with Collin Morikawa since the PGA champ was 8 years old.

Collin Morikawa arrived on the PGA Tour fully formed, or so it seemed. How does a player so young (23!) exude such self-possession? Plenty of credit goes to his parents, Blaine and Debbie, as well as his coaches, teammates and professors at Cal Berkeley. But the biggest influence in Morikawa’s maturation into a precocious major champion is his lifelong mentor Rick Sessinghaus, whose mind-body teachings transcend the usual driving-range talk, which can be as shallow as a 1-iron’s divot. Sessinghaus, 49, has a master’s and a doctorate in applied sports psychology and has long believed that to excel at the highest level the mental game is at least as important as the golf swing, even one as perfect as Morikawa’s. In this regard, young Collin has been both the pupil and the professor.

“Rick has taught me so much mentally,” Morikawa says, “but I think the one thing that really sticks with me is how important word choice is. If we talk about the word nerves, everyone has them, but how can you mentally change that nervousness into excitement or focus?”

Case in point came on the 70th hole of the recent PGA Championship, when Morikawa arrived at a short par-4 in the midst of a dogfight with half a dozen other world-class players. All week long Morikawa had laid up on this tight, dangerous little hole at San Francisco’s Harding Park, but now he took the magnitude of the moment and refined it into a kind of rocket fuel, powering one of the most thrilling shots in recent major championship history. Morikawa smashed a butter-cut with his driver, his ball cozying to within seven feet of the flag. The ensuing eagle put an exclamation point on the victory and provided sweet validation for Sessinghaus. A few years earlier he had contemplated a career change, intrigued by the possibilities of teaching peak performance strategies to corporate America. But, in the end, “I was never going to leave Collin,” he says.

He has learned much from the young Jedi. “Collin is extremely efficient and effective at practicing,” Sessinghaus says. “Having clarity before you practice is crucial. We have never prepared differently for different events. Collin doesn’t get more excited because the tournament is ‘important’ — it’s just a tournament for which he wants to be his best no matter the course or competition. That perspective is applicable to a lot of different things.”

Sessinghaus’ emphasis on the intangible is an outgrowth of his own frustrating golf career. He grew up playing football and tennis but became “obsessed” with golf at age 16. He got good enough fast enough to play for Cal State Northridge but sabotaged his strong ball striking with fits of rage; Sessinghaus once broke four clubs after a single bad shot. After college he gravitated toward teaching. He became fluent in Trackman and certified at the Titleist Performance Institute but still felt the game’s secrets could not be found on a launch monitor: “How does a player look like a world-beater at the range but then go out and shoot 82? I went down the rabbit hole on that question. I enjoyed trying to unravel the disconnect.”

Postgraduate studies and further investigations into young Collin’s beautiful mind led Sessinghaus to become a high priest of what he calls “flow state,” which laymen often refer to as the zone — that blissful feeling when the brain is unencumbered and the game is easy. Flow state can be so fleeting it is usually framed as a kind of voodoo, but Sessinghaus says, “It’s repeatable. You can train for it. What are the triggers, routines and rituals that got you there? When you focus on this, it makes the mental game more tangible.”

Morikawa began working with Sessinghaus at age eight and his education included very little time on the range, with most lessons occurring on the course and then ending with chipping and putting contests against Sessinghaus. “Having a coach push me by challenging me made me want to learn more and compete more,” says Morikawa. “It reassured me that what we were working on I could do in a competitive situation. I loved spending time on the course for practice and I still do. Being creative and hitting different shots with different lies taught me to think about the options available instead of just making the same full swing every time, like on the range.”

The final round of the PGA was the ultimate test of all that Morikawa has learned and his teacher has instilled. On that fateful Sunday morning, Sessinghaus woke before dawn at home in Burbank, Calif., and then roared up I-5 to San Francisco with Morikawa’s agent, Andrew Kipper, as copilot. They walked all 18 holes with Morikawa, had a mellow celebratory dinner with him in the Harding Park clubhouse, then drove back, with Sessinghaus crawling into bed at 2 a.m.

“It was quite a journey,” he says, speaking of both an unforgettable day and the 15 years of hard work together that preceded it.