Why one industry expert is urging caution among golf clubs 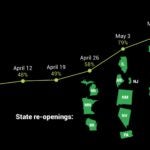 91 percent of golf courses are now open, and that number is expected to rise.

Golf’s latest numbers are out, and they seem to indicate fantastic news for the game’s health. The National Golf Foundation announced Tuesday that a whopping 91% of U.S. golf facilities are now open for play and projected that number would climb as high as 95% over the coming week.

Still, NGF CEO Joseph Beditz urged caution as golfers return to their courses. He called the openings a “yellow light” and not something that should be taken for granted.

“Golf has been given the go-ahead because it’s considered a relatively safe activity when social distancing is maintained and other precautions are followed,” Beditz wrote in an email. “But make no mistake, what has been given can be taken away. It’s now up to both golf course operators and golfers to keep golf open. Bad behavior will get noticed, and possibly recorded on a smartphone. One course in Florida was recently shut down by the local sheriff’s department for flagrant safety violations.”

Beditz added that public and private courses alike are struggling to deal with rule-breakers and that golfers should take extra precautions knowing the “potential paparazzi” eager to catch people violating guidelines.

“This is why NGF is sending a message this week to golf courses around the country, encouraging operators to follow the excellent guidance that’s been provided by leading golf associations, and reminding golfers that it’s up to them whether golf courses continue to remain open for play,” he wrote.

While Beditz is right to be cautious, he’s also right to be optimistic about the golf landscape. New Hampshire opened its courses on Monday, becoming the 50th state to do so. And while closures persist in certain metropolitan areas including New York, Washington, D.C. and Chicago, the vast majority of districts are allowing some modified version of play.

Some of the opening numbers are staggering. In just two weeks, municipal courses went from 44% open to 92%. All courses jumped from 58% to 91% over the same timeframe. Nearly 60% of retail locations are now open, up from 4% a month ago. 52% of courses now have open pro shops. And consumer spending is on the rise, too.

By region, the biggest jump came from the West Coast, which opened courses at a dramatic rate and leapt from 38% open on May 4 to 86% on May 11. New England is open at the lowest rate — just 67% — but that number was expected to rise, as Massachusetts and Vermont opened over the weekend and New Hampshire was scheduled to open on Monday.

Even TopGolf is reopening in Oklahoma City, its first reopening after closing all 56 locations for nearly two months.

You can read the complete NGF report here.