CJ Cup at Shadow Creek: 3 things to know after Round 3 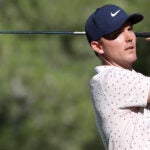 Eleven months and one day ago, Russell Henley called the obscure one-ball rule on himself. He had shot a 69 during the second round of the Mayakoba Golf Classic, only to realize after his round that he had played two types of the same ball. He was assessed eight penalty strokes, his 69 turned into a 77, and he missed the cut. Eleven months and one day leads, he leads. Karma. Here are three things you need to know after the third round of the CJ Cup at Shadow Creek Golf Course in Las Vegas.

Henley was as flawless Saturday as he was honest last November.

He birdied the 4th, 7th and 10th through 12th holes and made no bogies on his way to a 5-under 67, a 15-under total and a three-stroke lead over Xander Schauffele, Jason Kokrak, Lanto Griffin and Talor Gooch. Henley started the day four shots back, and he ended it three shots ahead.

“I putted really well. Left myself in some good spots to make some birdies and had some really nice par saves and scrambled well,” Henley said. “Did a lot of good things.”

Four players are tied for second

Kokrak, Griffin and Gooch rose up the leaderboard. Griffin shot a 6-under 66, with a bogey on the par-5 18 after hitting his drive into the water; Kokrak shot a 4-under 68; and Gooch a 3-under 69.

Schauffele fell down the leaderboard. He started the day with a three-stroke lead, but bogeyed four holes and shot a 2-over 74.

Justin Thomas, Tyrrell Hatton and Jason Day are five shots back of Henley, and Collin Morikawa is six behind.

Brooks Koepka, who has not played in two months due to recurring knee issues, shot his second straight 4-under 68 and is nine shots back of Henley.

Rory McIlroy fired a 6-under 66 and is seven behind.