CJ Cup at Shadow Creek: 3 things to know after Round 2 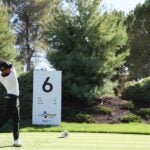 The leader played the U.S. Open in late September, then didn’t play. At all. For 10 days, he said. Then not competitively until this week. Less is more. Here are three things you need to know after the second round of the CJ Cup at Shadow Creek Golf Course in Las Vegas.

He would add one more birdie, and made no bogeys, on his way to an 8-under 64, a 14-under total and a three-shot lead over Tyrrell Hatton. Russell Henley is four shots back, and Talor Gooch is five.

“Some of those holes, you’re not really trying to birdie them; you’re kind of just trying to leave yourself an uphill 35-footer, and fortunately I made a couple of them,” Schauffele said. “It was a nice stretch. Got a little bit stale there on the other side. Pace of play slowed down a lot, kind of hot, easy to let the mind wander. Upset I didn’t make more birdies, but pleased I didn’t make any bogeys.”

Tyrrell Hatton is in second

Hatton, the first-round leader and last week’s winner on the European Tour, made seven birdies and three bogeys in his round of 68. Henley also shot a 68, and Gooch fired a bogey-free 65.

Collin Morikawa, the winner at the PGA Championship, and Jason Kokrak were six shots back, and Matthew Fitzpatrick was seven.

Brooks Koepka, who has not played in two months due to recurring knee issues, was 6-under through 13 holes before bogeying his 14th and 15th holes for a 4-under 68 and a 2-under total.

Also at 2-under was Rory McIlroy.