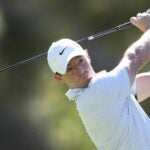 The numbers don't lie. Rory McIlroy is showing the signs of a precipitous distance gain.

On Wednesday, Rory McIlroy stepped to the podium and bowed down to the golf world’s new preeminent force. He waltzed to the dark side (if you can call it the dark side) with trademark introspection and candor, but the message was clear.

McIlroy had given up attempting to wrap his mind around Bryson DeChambeau’s reality-bending U.S. Open victory. In fact, he’d submitted to it — dipped his toes into the fountain of brute where DeChambeau so willingly bathes.

Before it became too late to compete with DeChambeau at Augusta National in November, McIlroy had decided to chase DeChambeau’s distance gains himself.

“From what I’ve done and what I’ve been sort of experimenting with the last couple weeks, it’s the fastest I’ve ever moved the club, the fastest my body’s ever moved,” McIlroy told reporters. “I’m just trying to keep up with the way it’s going.”

Just one day prior to the start of the CJ Cup, McIlroy stated his case. He depicted a sensible approach to gaining distance, a sort of moderate’s response to DeChambeau’s extremism.

For the time being, McIlroy wouldn’t try to hit 190 mph ball speed on every drive, he wouldn’t experiment with a 48-inch driver, and he’d probably keep his calorie count below 10,000. He would practice reaching 190 mph ball speed, tweak his driver setup (in part) to help those efforts and swing away when the situation dictated.

It’s been four days since McIlroy spoke those words. In that time, he’s played three rounds at the CJ Cup at Shadow Creek in Las Vegas. Given the venue (which isn’t known as a bomber’s paradise), some doubted we’d see McIlroy unsheath his newest weapon this weekend. Some doubted whether we’d see him use it at all.

The numbers tell a different story.

With the obvious qualifier of a (very) small sample size, McIlroy’s week at the CJ Cup raises the question of whether we’ve already seen him make a distance leap.

Through three rounds, McIlroy is first in the field in average strokes gained: off the tee (1.87). He owns the second-longest drive of the tournament at 367 yards (behind only Cam Champ). And his average driving distance is a shade over 338 yards (338.16), which is the longest in the field at Shadow Creek by nearly 15 yards. (All these stats courtesy of PGA Tour Shotlink.)

Yes, these stats don’t speak to nuance. Like, for example, the fact that the setup at Shadow Creek seems to be tilted against bombers, which could lead long-hitters like Bubba Watson and Cam Champ to play irons or fairway woods off the tee. They also don’t speak to conditions, which could have played favorably for McIlroy but not for other members of the field.

But perhaps nuance isn’t quite as relevant in the face of a favorable outcome. McIlroy hasn’t just found success relative to the field – he’s used his distance advantage to overcome his own flaws. McIlroy entered the final round tied for 10th despite a dreadful performance with his irons and wedges. He ranked near the bottom of the field in average proximity of approach, strokes gained: approach and greens in regulation, yet still managed to keep in contention thanks in large part to his mistake-free play off the tee.

McIlroy’s distance gains at Shadow Creek mirror the sort of reasoned approach he mentioned Wednesday. It’s improbable and perhaps even impossible for someone of his size and stature to outdrive someone of DeChambeau’s. McIlroy is a long hitter, but it’s unlikely we’ll see him intentionally adding weight or length to begin uncorking 400-yard bombs. But if he isn’t aiming to best DeChambeau — merely to keep up with him — is it possible McIlroy has already accomplished his goal?

“I’ve been complaining about my driving and off the tee, but this week’s been really good,” he said. “So if I can just keep continuing to see progress there into tomorrow, it would be great to shoot another low one and get myself right up there. But I feel like I’ve made some good strides in my game this week.”

Now, McIlroy’s sights turn back to November, when DeChambeau plans to wield his newfound distance to overpower the dogwoods at Augusta National. Surely, DeChambeau will be the longest player in the field at the Masters, but he won’t have to look too far over his shoulder.