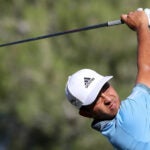 Schauffele started the third round of this week’s CJ Cup with a three-shot lead. He shot a 2-over 74. And is now three shots out of the lead.

“Yeah, it’s all part of my master plan,” he said Saturday, tongue-in-cheek. “Just had to get behind here, back in a comfortable place and looking forward to tomorrow.”

The fourth-round tee times are below. Golf Channel will broadcast the tournament from 5-8 p.m. ET.