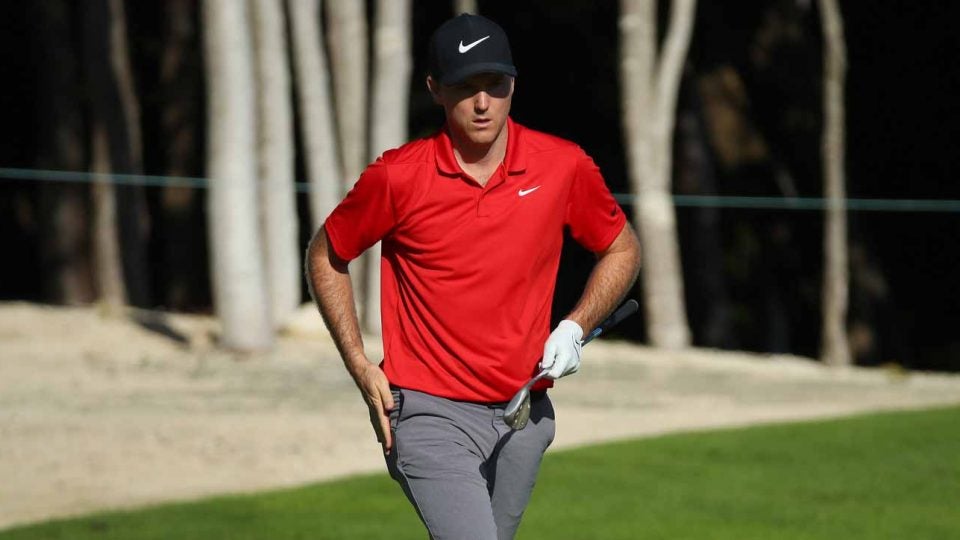 Russell Henley got himself in a dash of trouble on Saturday at the Mayakoba Golf Classic when he realized that he had violated the One Ball Rule, costing him eight strokes and a missed cut.

The 30-year-old thought he had posted a second-round 69 (and a two-day total of 7-under) before he discovered he had violated a penalty in an unlikely place: the autograph line. While handing out golf balls after the round, Henley discovered that he had used two different types of Titleist ProV1x golf balls during the round.

PGA Tour’s Cameron Morfit reported that the eight rules officials on site gathered together and consulted the USGA to determine the correct ruling. At the same time, Henley worked out which holes he had used the illegal ball on, ultimately settling on 9, 10, 11 and 12. After deliberation, the Tour decided to penalize Henley two shots per hole for a total of eight penalty strokes.

News
Could this be the greatest shank in golf history?

As a result, Henley’s 69 turned into a 77, leaving him several shots outside the cut line and ending his consecutive cuts streak at eight.

Rules official Brad Fabel told the PGA Tour that he had a lot of respect for the way Henley handled the controversy. “He was great,” Fabel said. “I’ve got a ton of respect for that gentleman.” He added that the decision had not been easy.

“It was a small dash, a different way it was marked that would have been easy to overlook,” Fabel said. “He came to us and said he didn’t know how it had gotten in his bag.”

The USGA’s ruling reads as follows:

“When changing balls, the player is permitted to substitute a ball of another brand or type unless the Committee has adopted the One Ball Condition of Competition (see Appendix I; Part C; Section 1c). This optional condition (usually referred to as ‘The One Ball Rule’) is generally adopted only in events that are limited to professional golfers or highly-skilled amateur golfers. Generally, this condition of competition is not adopted in club-level competitions.”

As for that other ball? While Henley didn’t independently confirm which ball it was, we can guess from the “dash” mention that the ball in question had to do with Titleist’s “Left Dash” ball, newly released to the public just last month. Here’s GOLF’s Jonathan Wall on the Left Dash ball:

Roughly 80 percent of professional golfers use the Titleist Pro V1 or Pro V1x currently available to the public, but for a select few who require highly specific launch and spin characteristics, there are three “Custom Performance Option” prototype versions that have remained Tour-only offerings, until now.

Starting Oct. 1, recreational golfers will be able to custom order one of the balls: Pro V1x “Left Dash.” Available through authorized Titleist accounts, the ball is differentiated from the standard version by the dash on the left side of the Pro V1x stamp. Hence, the “Left Dash” name.

Compared to the retail version, which offers a high launch and moderately high spin, the “Left Dash” model generates a similar high launch with less spin.

While most professionals gravitate toward Pro V1x because of the spin it generates, there are a handful of elite amateurs and major winners, including Lucas Glover and Jimmy Walker, who prefer the launch of Pro V1x with a lower spin rate. It’s a subtle recipe tweak some better players will be able to notice and appreciate.

Harris English led the Mayakoba Classic through two rounds at 13 under par.