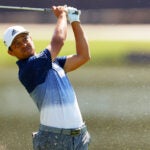 Xander Schauffele put together one of the most underrated 2020 campaigns on Tour.

Once upon a time, I asked Xander Schauffele if he had peaked. Predictably, it didn’t go well.

When I noted in 2018 that his 2nd place finish at Carnoustie was “probably the peak of his career to this point,” he took it as, “This is as good as it gets, buddy. Enjoy it!”

“I hope I haven’t peaked yet,” Schauffele said, before laughing it off. Whatever was lost in translation, we’ll leave that aside. With hindsight, we now know that he definitely hadn’t peaked. The 26-year-old is now the No. 8 player in the world and has become one of the most consistent players on the planet.

And because we at the Drop Zone are a reflective bunch, we sat down with Xander again, two years after our little ‘peak’ kerfuffle, to see where his head is at. (Check out the podcast below!) My personal conclusion is simple: a Xander peak is coming, and it’s going to be great.

Schauffele’s trajectory has been slow and steady compared do his fellow Class of 2011 Tour pros. Jordan Spieth, Justin Thomas, and Daniel Berger all had their time in the sun before Xander really had his moment. And, again, Xander doesn’t really think he’s had his moment yet.

All of this is to say, buy up all the Xander Schauffele stock you can. He finished 2020 ranked 3rd in Strokes Gained: Total, an impressive mark for someone who didn’t actually notch a PGA Tour victory (despite beating everyone else at East Lake). His new floor is so high that he had just one finish since February that wasn’t a top 25. Just because the Ws aren’t arriving doesn’t mean that they won’t.

Strokes Gained: Off the Tee — 8th

Strokes Gained: Around the Green — 37th

That’s well above average in every aspect, and elite in one of the most important categories (driving). Over the course of a four-round tournament, Schauffele picked up at least a full stroke on the field (.25 or more per round) in every aspect but short game (which he narrowly missed at .225) in 2020. Few players can actually pull this off over a full Tour season. Jason Day in 2015, Jordan Spieth in 2015, Dustin Johnson in 2016, Rory McIlroy in 2019. These are some of the seasons where a Tour player has been top-notch all across the board. Taken optimistically, Xander isn’t at their exact level, but he’s on the cusp of it.

His airtight game makes him feel like a steady stock that could have a very profitable future if the right few things break his way, or if the putter gets really hot for two months.

We could see … a Xander Boom.

To get the lowdown on his game, we asked the man himself for how expectations have changed now, and what it’s like trying to compete with the likes of Bryson DeChambeau, Rory McIlroy and other players who simply hit the ball further than him. You’ll find his answer to that, and a whole lot more in the podcast below.