How Rory McIlroy struggles to go from the range to the course (like you!) 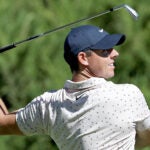 The shots on the range. Plural. One letter does a lot of work there. As you are. You can go through X, Y and Z swing thoughts as you go through your small, medium or large bucket. Ball one might not look good. But ball 30 might.

The shot on the course. Singular. Come back, S! You can still go through X, Y and Z. But if ball one doesn’t look good, it’s onto shot two.

Rory McIlroy says he’s been working on his swing since the U.S. Open at the end of September. A few days ago, he even showed on his social media accounts that he was touching 190 mph ball speed in an effort to gain more distance. That was on the range. This week, he’s playing the CJ Cup at Shadow Creek Golf Course in Las Vegas, his first event since the Open, and he shot 1-over 73 and 2-under 69 over the first two rounds.

“You know, it’s hard, I’ve spent sort of the last two weeks working on my golf swing, and I’ve maybe played a total of nine holes,” McIlroy said Friday. “I’ve just spent that time on the range. Then trying to go from the range, where every swing that you’re making with a thought or two or three, to on the golf course, where if you have one, that’s enough.

“Caught myself a few times yesterday – too many thoughts out there and not really freeing myself up. Today, did a better job of that – mentally freed myself up, didn’t worry too much, didn’t try to be too perfect and hit some really good shots.”

“It’s very hard,” he said. “I think that’s why sometimes when you see guys trying to make, like, a major swing change, that it’s a struggle, right? It’s a struggle. You’re thinking so much about what you’re trying to do in your golf swing rather than where you’re really trying to hit the ball. I played a little too much golf swing yesterday, and today I just sort of tried to see my shots more and visualize a little more and it was better.”

McIlroy said he’s done it before.

Last year, he was also working on his swing. He shot 75 and 71 and missed the cut at the Memorial. Then, a week later at the RBC Canadian Open, he won. By seven shots.

“I feel when you’re thinking so much about your golf swing and then someone says, ‘Well, just forget about it and go play,’ it’s very hard to do that when for two weeks solid, all you’ve been thinking about is your positions and stuff,” McIlroy said. “It just takes time. Sometimes it takes me a week to get out of it. Yesterday, I sort of caught myself a little bit. Hit some balls on the range afterwards trying to free myself up. …

“It’s just about doing the work, but then almost forgetting the work when you get out on the course and just let yourself be a little more athletic.”