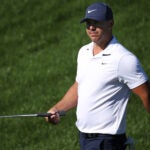 Brooks Koepka during Saturday's third round of the CJ Cup.

Koepka hit his tee shot on Saturday on the 293-yard, par-4 11th hole at Shadow Creek Golf Course into the thick grass above the front greenside bunker. He couldn’t hit his second during Saturday’s third round of the CJ Cup. He couldn’t find it. Neither could his search party.

“So the search is still on for Brooks Koepka’s ball,” an announcer on the PGA Tour Live broadcast said. “Have you ever seen that many people search that thoroughly, and where are we at on the clock?”

About half of the group was above the bunker, either squatting or on their hands and knees, repeatedly padding down the grass. McIlroy was in a plank position looking before lowering himself to the grass, as if he were doing a pushup. The other half of the group, including Koepka, was in the bunker, was also repeatedly feeling through the grass. McIlroy eventually would walk over and search next to Koepka.

After maybe 2 minutes, a red-shirted volunteer found something.

“Is that it? Hold on, I can’t see,” Koepka said as he leaned forward out of the bunker to look.

A few cheered. McIlroy also, oddly, found a tee and tossed it aside. Koepka laughed.

“An easter egg,” the announcer said. “That is too good.”

Koepka was able to take a drop. The rules provided relief. He putted his second shot, and he rolled it to within about 6 feet. He made the birdie putt.

“Wow, after everything, the dramatic antics that happened on the 11th hole, that’s a birdie for Brooks Koepka,” the announcer said.