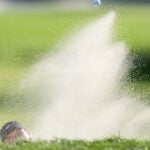 After taking the first day off, Winged Foot came back in full force on Friday at the 2020 U.S. Open. Just three players shot under-par rounds, and only six players head into the weekend under par for the tournament.

Naturally, that raises the question: If the pros are struggling in U.S. Open conditions, how would a solid recreational golfer, who ordinarily clocks scores in the mid-to-low 80s, fare? It’s a cliche question, I know, but an interesting one. So, I posed it to Jason Kokrak, who’s cruising into moving day in sixth place at one under.

“If a 10 handicap was driving it well, they could probably break 100,” Kokrak says. “But it’s one of those things. If they don’t, they’re not. It’s an incredibly difficult golf course. And if they were to miss it over some of these greens, or anywhere in the rough, it’s an automatic double.”

What makes a U.S. Open course so difficult?

Kokrak’s verdict is that your average 10 handicap would need to drive the ball well in order to break 100, and I’m inclined to agree. I’m speaking from experience here: In 2016, I won a media lottery to play Oakmont a day after the U.S. Open. I tipped it out (because you have to) as a two handicap and was quite proud of my eventual 19-over 89.

There’s no one thing that makes a U.S. Open course difficult. It’s the combination of all of it. The length, which for pros is manageable, is prohibitive for recreational golfers. Hit it in the rough, and you’re not just making the course even longer for yourself, you don’t possess the power to recover. Pros can grind out pars or bogeys. You’re fighting to stay in the hole at all.

And perhaps the most underrated element of being a professional golfer has nothing to do with their physical or technical ability. It’s their mental ability. Their ability to judge situations, to see the outcome before they’ve even hit their shot. It’s become second nature to them to know where to miss and why. Wind’s gusting, as it was on Friday? They know how to play it. Technical execution, when you zoom out on the scope of the entire game, is a relatively small portion. For a pro, that’s the easy part. For the rest of us, it’s the hardest.