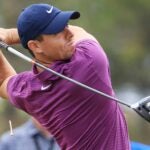 Rory McIlroy would like to be perfectly clear: he isn’t diving headfirst into the pool of golf’s great distance proliferation. But after watching Bryson DeChambeau dismantle the field en route to a U.S. Open victory at Winged Foot, he’s decided to dip his toes in the water.

The four-time major champion admitted to reporters Wednesday that he’s experimenting adding speed and distance to his game ahead of the Masters in November.

“From what I’ve done and what I’ve been sort of experimenting with the last couple weeks, it’s the fastest I’ve ever moved the club, the fastest my body’s ever moved,” he said.

The former World No. 1’s acknowledgment hardly came as a surprise ahead of the start of the CJ Cup in Vegas. Rumors have swirled about McIlroy ever since video surfaced on social media showing him touching 190 mph ball speed.

“I think length has always been an advantage in this game,” he said. “You go back to even the ’60s, and the ’70s and you look at what Jack did. Jack was one of the longest out there and he used that to his advantage. Tiger when he came on the scene.”

Even in a landscape dominated by 375-yard drives and 200 mph ball speed, don’t expect to see Rory modeling for Orgain. McIlroy insisted Wednesday his goal isn’t to emulate Bryson’s bulk-and-bomb.

“Having length is an advantage and I’ve always been pretty long, but I think what I want to do is at least know that I have it if I need it,” McIlroy said. “I’m not going to try to do it all the time, I’m not trying to get my ball speed into the 190s every time I hit a driver, but at least I know that if I need to do it, I can do it.”

Still, the pronouncement marks a significant shift for McIlroy, who just a month ago expressed his bafflement with DeChambeau’s winning strategy.

“I don’t really know what to say because that’s just the complete opposite of what you think a U.S. Open champion does,” McIlroy said at the time of DeChambeau. “Look, he’s found a way to do it. Whether that’s good or bad for the game, I don’t know, but it’s just — it’s not the way I saw this golf course being played or this tournament being played. It’s kind of hard to really wrap my head around it.”

As for his setup, McIlroy has tweaked that too, even if he’s holstering the 48-inch driver (for now).

“I’ve always played a shaft that’s been around 75 grams, I went to a shaft that’s closer to 60,” he said. “But that wasn’t really to do with speed, I feel like [if] I get a lighter shaft and a lighter club, I can keep it more in front of me and the weight on instead of it getting stuck behind me, so that was more of a technical thing.”

“But,” he quickly added. “A lighter shaft obviously helps because you can move that faster and obviously that translates into a little more ball speed as well.”

A month after DeChambeau’s groundbreaking win at Winged Foot (and presumably following a series of speed training sessions of his own), Rory arrived at the CJ Cup with a newfound appreciation for the U.S. Open champ.

“Yeah, it’s been fun trying to do it,” he said. “I don’t know how Bryson does it every day. You hit drivers really hard one day and you sort of have to back off for a couple days and do it again. It seems like he’s got a lot of robustness in that body that he can keep doing it day after day.”

Even if he won’t say as much, it’s clear. Rory isn’t waiting for the Masters to see if Bryson DeChambeau’s major championship success was a fluke.

Track your distance gains with these Pro Shop accessories