Bryson responds to Euro Tour pro’s claim that bombing drives is not a skill: ‘It’s a compliment to me’ 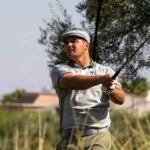 Bryson DeChambeau tees off on the 9th hole during the second round of the 2020 Shriners Hospitals for Children Open.

Bryson DeChambeau and Matthew Fitzpatrick share the distinction of having a U.S. Amateur title on their resumes, but their games couldn’t be more different. (To be fair, though, DeChambeau’s current game can’t really be compared to anyone at the moment.)

But as an example of the beauty of golf, both DeChambeau and Fitzpatrick are currently near the top of the leaderboard at tournaments on opposite sides of the world: DeChambeau is one shot back at the Shriners Hospitals for Children Open in Las Vegas, and Fitzpatrick is battling at the European Tour’s flagship event, the BMW PGA Championship in England.

Though he averages well over 300 yards off the tee, Fitzpatrick has garnered a reputation as more of a great ballstriker and putter — bomb and gouge is not his game. And at 5’10” and 155 lbs., he’s 85 lbs. lighter than DeChambeau’s reported weight.

After his second round at the BMW on Friday, Fitzpatrick was asked how he felt about DeChambeau’s gains, and Fitzpatrick didn’t hold back.

Fitzpatrick cited DeChambeau’s performance at Winged Foot as evidence of his claim.

“Winged Foot, the fairways were tight as hell, and I drove it brilliantly, and I actually played pretty well, and I’m miles behind,” Fitzpatrick said. “He’s in the rough and miles up and he’s just hitting wedges everywhere. It just makes a bit of a mockery of it I think.

“I just looked at Shot Tracker yesterday, some of the places he hit it,” Fitzpatrick continued. “And he’s cutting corners — when he’s on, there’s no point, is there. There’s no point. It doesn’t matter if I play my best, he’s going to be 50 yards in front of me off the tee, and you know, the only thing I can compete with him is putting, and that’s just ridiculous.”

In DeChambeau’s post-round interview on Friday in Las Vegas, he was asked about Fitzpatrick’s comments and offered a lengthy response.

“I appreciate that comment,” he said. “It’s a compliment to me honestly. A year ago I wasn’t hitting in anywhere near as far as I am today. It took a lot of work, a lot of hours to work through the night to figure out a lot of this stuff. I would say it actually takes more skill to do what I’m doing, and albeit I may have — my fairway percentages are a little bit down, I’m still believe I’m hitting it straighter than what I was last year with the distances that I was hitting back then.

“I feel like I’ve started to go down a path that’s allowed me to have an advantage over everyone, and I think that is a skillset when you look at it,” DeChambeau continued. “For me out there today, I was still able to hit a lot of fairways at 360 yards. That’s tough to do with drivers. So from my perspective, I think it takes a little bit more skill to do what I’m doing, and that’s why there are only a few people doing it out here.”

DeChambeau then offered to help Fitzpatrick max out his own yardage.

“I would love to have a conversation with him about it and say, Hey, man, I would love to help out. Why couldn’t you do it, too?” DeChambeau said. “You see Rory and DJ doing the same thing, too. They’re seeing that distinct advantage, and I feel like it’s great for the game of golf.

“I don’t think it takes less skill,” he continued. “I’m still putting it great; still wedging it mediocre, the same, maybe a little bit better. It shows out here that I’m still hitting fairways. Yeah, I do hit a couple errant shots like on 9 today, but I do hit a lot of fairways, I still hit great irons, and I make a lot putts. I still think there is a lot of the skill in that.”