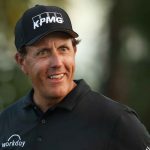 Phil Mickelson has been a delight — and sometimes delightfully bizarre — player to follow for his nearly 30-year professional career.

In his nearly three decades as a professional golfer, Phil Mickelson has been nothing if not entertaining. The 50-year-old winner of five major championships and 44 PGA Tour events leads the 2021 PGA Championship after 54 holes and is vying for his sixth career major.

In recent years, thanks to his active social media presence, fans have gotten to know Mickelson better than ever before. Below, we whipped up a retrospective of his eight most bizarre moments of the last decade, which prove there’s truly no other player like him.

Phil is never more Phil than when he’s attempting a completely unorthodox or crazy shot, the most memorable of which would be his recovery from the pine straw on the 13th hole at Augusta National, en route to his Masters win in 2010.

Other more recent examples of Mickelson’s creativity include this shot from a water hazard at a Champions Tour event in Tucson, hitting a driver from the rough, a flop shot with a fairway wood, even a putt from 78 yards away.

A button-up as golf attire? Yep, nobody can pull it off quite like Phil. Mickelson debuted his partnership with Mizzen+Main back in 2018 and gifted us with this wonderfully bizarre commercial.

There’s perhaps no player who thinks more about his on-course gear than Mickelson, and he’s made some truly headline-worthy choices with his equipment over the years. Whether he was opting to carry two drivers or none at all, you can always count on Phil to think outside the box. Just this week, he commissioned a custom Callaway driver, and even opted to use a game-improvement iron setup at the November Masters.

When Mickelson made his Twitter debut back in 2018, fans weren’t sure what to expect. Luckily for all of us, Mickelson has embraced social media as the perfect showcase for his varied interests. Over the past three years, followers have been treated to plenty of entertaining banter, “Phireside with Phil,” instruction, and insidery videos, like Phil’s now-famous Magnolia Lane confessional, where he jabbed Matt Kuchar and explained his plan to “hit bombs” at Augusta National.

Remember when Phil gave us a taste of just how awesome he could be in the booth? So do we! But we also remember this opening joke, which fell a bit flat, to say the least.

One of the most bizarre moments in the annals of Phil was his completely out-of-character meltdown at the 2018 U.S. Open at Shinnecock. Frustrated by the conditions on the green, Phil batted his ball with his putter before it had come to a complete stop, incurring a two-stroke penalty and igniting long-lasting controversy.

Whether he’s donning custom-made shades, hawking a coffee concoction that promotes weight loss, pranking his fellow Tour players or simply taking their money, one thing’s for sure: There’s no one like Phil, and that’s just the way we like it.

Shop our selection of Callaway products