In this golf world, few similarities exist between Phil Mickelson and me. But fasting? That felt like a level playing field. If Phil can go without food for six days, why can’t I?

The truth is, we both needed a change. Lefty’s game had tanked ever since his win last March at Pebble Beach. His body, as he described it, needed a “hard reset,” so he fasted for six days in July, consuming only water and a special coffee blend he crafted with the help of performance coach Dave Phillips. As for me, I had become a shell of my former, fitter self, and was reaching shameful levels of gym avoidance. I could probably use a “hard reset,” too.

Lefty was thrilled to hear I was following in his footsteps, which made it all the more critical that I do it exactly as he did, right down to the teaspoon. This meant an expensive trip to Whole Foods (where I learned Phil and I are in a different tax bracket). On the night before Thanksgiving, Mickelson laid out the entire recipe for me, with some thoughts on each ingredient.

The pace at which I had somehow transitioned from “You’re doing Phil’s fast,” to “Phil is your dietician now” cannot be overstated. His directions were simple: Upon waking, drink 16 oz. of water. Brew 12-16 oz. of coffee and blend all ingredients. Down it quickly, then drink only water the rest of the day, somehow smiling throughout. “The first two days are brutal,” Phil texted, stoking my optimism. “It gets easy after that cuz you feel so good.”

The next day, Phil reached out again, this time with a link to an article about the antioxidants in coffee. “The coffee I sent you could be the healthiest thing you’ll ever put in your body,” he texted. “Just saying.” It’s good to have fasting friends.

The first 24 hours were, as Phil warned, particularly rough. As an avid connoisseur of bacon, egg and cheese sandwiches, hunger crept in early, and didn’t leave easily. Phil’s drink? It’s not bad. And when it’s the only thing on the menu, I began to long for it. 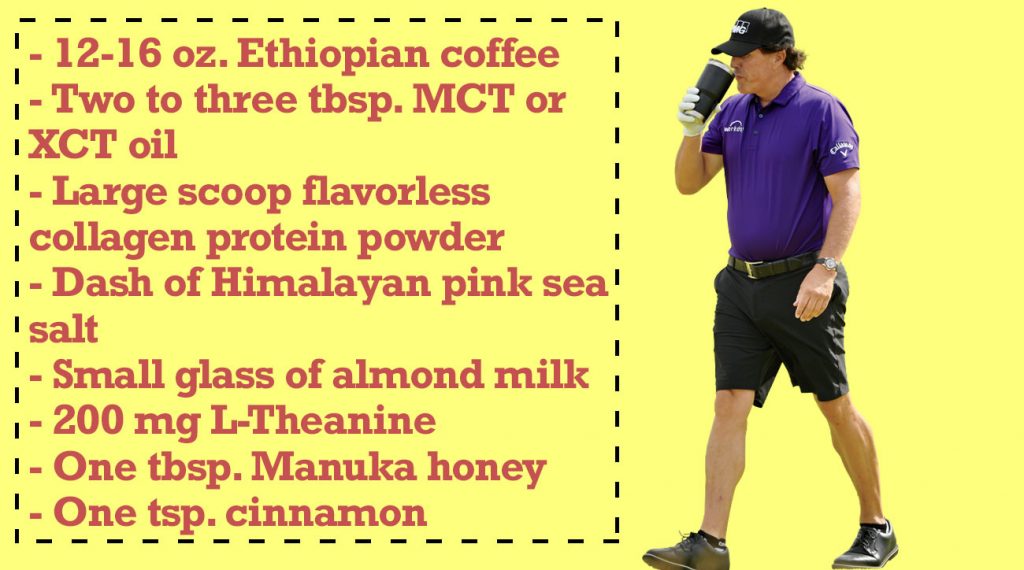 Mickelson was right — Day 2 was worse. On an NFL Sunday, a hungry man realizes the frequency of food commercials. There are many. And in a tiny NYC apartment, food is quite literally always within reach. Starving for inspiration, I re-scanned my messages. “Everything you put in your body either causes disease or helps your body fight disease,” Phil had said. It’s some simple dieting brilliance from one of the greatest golfers ever. When you consider your intake to exist on a spectrum from bad to good, it becomes easy and obvious to avoid the bad.

By Day 3, I began to understand hunger differently. When your craving is an itch you simply cannot scratch, it is automatically less powerful. Hunger, you realize, is a habitual affliction of the mind much more than the body. Did I think I would get existential with my food thoughts? No, but here we are.

At the halfway point of the fast, all I craved was the coffee blend, and the six hours of strong energy it offered. With nothing else to pull from, the espresso would zap my body into form, and I remained focused for hours. (GOLF.com should starve me more often.)

I ran three miles on Evening 3 and played basketball on Evening 4. Continuous breaks, I learned, are absolutely necessary when running on empty. To my surprise, and aligned with the wisdom of my dietician, the energy I needed was there; sustaining it was the hard part. And to be fair to myself, Mickelson did 90 minutes of yoga and hiking. He wasn’t exactly playing full-court defense.

Perhaps now is an appropriate time to note that most doctors advise patients to ease into a six-day fast. Start with an 18-hour program. Then 48. Work your way up this fasting ladder. In other words: don’t be me. Don’t be me, because six days was probably too much. By the evening of Day 5 and the morning of Day 6, I was painfully depleted. My muscles felt weak, and feverish chills crept in as soon as the coffee blend wore off. It was time to finish my fasting debut.

On the seventh day, Popeyes delivered two of their famous chicken sandwiches and, with them, a deep food coma. I had lost 11 lbs. and, my fast-food binge notwithstanding, I was keen to keep them off. This is important! I followed the pig-out with salads, fruits and grains, thanks to more advice from featherweight Lefty. “Your stomach is smaller,” Phil wrote when I was done. “Don’t make it bigger. Let it stay small.”

On that front, we’ve made a big change. My burgeoning relationship with the bagel guy on 44th Street is no longer, as a snack in the morning is all we need to make it to my salad at lunch. As for Mickelson, he lost 15 lbs. initially, and in eating just twice a day now, he’s dropped just as much in the months since. He even performed a 3-day fast last weekend to reset his immune system before the glut of his Tour season begins. The truest effect of the Mickelson fast — for both of us — is sustained energy on the back end. Where I once came home and got comfy on the couch, I now detour to the gym and get un-comfy … in a good way. Somehow smiling throughout.