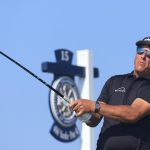 Phil Mickelson's driver is just a hair under the maximum length allowed in competition.

Phil Mickelson and Callaway had a vision in mind for the 2021 Masters — and it involved the five-time major winner quietly working his way into a 48-inch driver to gain an edge off the tee. If the story sounds familiar, it’s because Mickelson used a 47.5-inch Callaway Mavrik Sub Zero driver five months prior at Augusta in a move that was spurred on by Bryson DeChambeau’s race to employ a similar club at the event.

Mickelson beat DeChambeau to the punch that week, but the driver never seemed to give him an advantage.

“Switching to the 48-inch driver, Phil got progressively longer,” said Jacob Davidson, Callaway’s PGA Tour manager. “But from a design standpoint, it’s sort of been a moving target where originally we didn’t quite have something that was made back a year-and-a-half ago when we were designing these models to be that low lofted and really perform at the optimal levels for a 48-inch driver shaft.”

While Callaway didn’t have a driver designed to match Mickelson’s requested specs, they were working furiously behind the scenes to come up with a solution.

Callaway has become adept at creating prototypes on the fly for Mickelson at their Carlsbad, California headquarters. Phrankenwood first comes to mind — a custom driver that was designed specifically for the 2013 Masters in an extremely tight time window.

With Augusta as the target, Callaway continued to work closely with Mickelson on the driver in early January, but something still wasn’t right. Callaway needed to retool the 6-degree Epic Speed head (5.5 degrees actual loft) to match the longer shaft, which required the head to be made lighter than most of the company’s retail heads.

“The head weight on Phil’s new driver is 188 grams,” Davidson said. “When you consider most guys are playing a head that’s around 196 to 200 grams, it’s a significant change that doesn’t leave you much room to move weight around when you’re shedding mass and also trying to dial in launch and spin.”

Callaway also had to figure out a way to get the face to appear more square in the address position — a goal that wasn’t possible with the Mavrik Sub Zero head as Mickelson attempted to crank the loft down, which in turn opened up the face. After going through numerous iterations of the one-off head, designers were able to give Mickelson the square face he required at 6 degrees.

“When you’re dealing with some very specific parameters, you need to create a total one-off,” Davidson said. “This is new territory for us, getting the head weight and shaft right to make sure Phil is dialed in. Once he saw a much tighter dispersion very quickly, with the right launch conditions, he was sold.

“Compared to Mavrik, this Epic Speed we built for him has a much more neutral setup at the lower loft. Before when he was trying to go longer, we were essentially taking a driver that was originally designed to be 45 to 45.5 inches and tweaking it to make it work. Now we’re able to push the CG more forward and lower and with that, the driver is a little bit faster and more forgiving.”

According to Davidson, Mickelson wanted to gain ball speed and distance while also staying within his spin rate “operating zone” on draws and fades. That meant getting to 1,900 RPMs on draws and 2,400 RPMs on cuts, something he was finally able to accomplish with the new head. The final piece of the driver puzzle that helped him get there was a custom 47.9375-inch — just 1/16-of-an-inch under the legal limit — Fujikura Ventus Black 6TX shaft that was made specifically for Mickelson’s driver head.

Mickelson took to the new shaft almost immediately and put it in play the week prior to the Masters at the Valero Texas Open, but the head still wasn’t where Mickelson and Callaway wanted it to be. So he played the Masters with the longer shaft in the Mavrik head.

“We just didn’t quite get it right,” Davidson said. “But we were close.”

Close enough, in fact, that Mickelson shifted his focus to the PGA Championship. The week of the Wells Fargo Championship, the Epic Speed prototype head and longer Fujikura shaft was on call as his backup. Shortly thereafter, he made the decision to put the driver in play at Kiawah.

“The tighter dispersion he saw with the optimal launch conditions is why he was so eager to put it in play this week where hitting fairways was going to be at a premium,” said Davidson. “This was a fluid situation for sure, but we managed to get there and deliver a driver that Phil felt confident using.”

The proof is in the results: Mickelson leads the PGA Championship at the midway point. If he manages to stay in contention for his sixth major, expect to hear a lot about the driver from golf’s ultimate pitchman.

Want to overhaul your bag for 2021? Visit the expert fitters at our affiliate, True Spec Golf. For more on the latest gear news, check out our latest Fully Equipped podcast below.