Phil Mickelson amazingly hits a full-swing driver from the rough 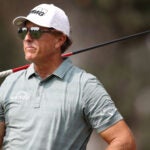 Phil Mickelson and the club he used on back-to-back shots on the par-5 9th hole on Saturday.

Phil Mickelson hit his driver into the thick rough left of the fairway on the par-5 9th hole at the Silverado Resort and Spa North course.

Mickelson then hit his driver out of the thick rough.

The five-time major champion had an overhanging branch to his left. He had another to his right. He could only punch-out on Saturday during the third round of the Safeway Open in Napa, Calif.

“I think it should be fine. It looks like it’ll come out just fine,” Phil Mickelson said as he stood over the ball for a moment and then stepped away.

“I mean, if we do hit the 9- or 8-iron, it would still be less than 100 yards,” said Tim Mickelson, who has seen his brother hit a daring shot or two over the years.

“Yeah, but this will get into the bunkers up by the green. It should be – this should work out fine,” said Phil Mickelson, who has rarely seen a daring shot he didn’t like over the years.

Tim Mickelson lifted the bag and stepped away. Phil Mickelson looked ahead and took four steps to the ball. He took one practice swing and twirled the head of the driver before it settled into the grass. He slightly opened up his stance and looked up at his target twice.

“There’s a chance, and I’ve seen this, where the ball doesn’t launch quite high enough and only goes about 5 feet. Just sticks right in front of you,” one announcer said on the PGA Tour Live broadcast.

Mickelson swung with an abbreviated follow through, the ball rose after it shot past the branches, and it landed just before the bunker in front of the green.

“He muscled it out,” the first announcer said.

“What the heck do we know?” the second announcer said.

“Nothing,” the first announcer said.

Mickelson walked toward his ball, tickled that he added “driver out of the rough” to his legend. He would pitch the ball on to about 3 feet with his third shot and then make the birdie putt, part of his 2-under round of 70.

“Yeah, he didn’t like driver out of the rough,” Mickelson said to playing partner J.B. Holmes after the shot, referring to his brother and caddie. “I don’t know.”

“I feel like I’ve seen everything in golf,” Holmes said. “That’s my first on that one.”