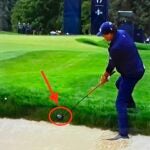 What was going on in Phil's mind for this shot?

On a day in which the conditions at Winged Foot were unexpectedly ripe for scoring, Phil Mickelson opened his return to the site of his 72nd U.S. Open demise in 2006 with a nine-over 79. He couldn’t hit a fairway, which will ultimately spell an end to any fairytale redemption story.

And so, right on cue, Phil Mickelson clipped into YOLO mode — my favorite kind of Phil Mickelson. Specifically on the 17th hole, his 8th of the day, when he pulled a wood from 174 yards in the rough with one foot in the bunker.

Alright, let’s break it down.

Why it’s not as strange as it seems…

So if you watch Phil Mickelson play enough golf, you’ll notice that he hits fairway wood from the rough fairly often. Sometimes, he’ll even hit a driver from the rough. It’s an eye-popping shot choice, at first, but there’s some genuinely good reasons to consider it for yourself:

All of this likely factored into Phil’s decision to pull a fairway wood here, and they’re things you should keep in mind, too, when you find yourself in the rough during a round.

All that said, there was certainly one questionable component to Lefty’s decision to pull a fairway wood on this occasion.

…but still a little strange

All that said, I’m not entirely sold that Phil’s decision to hit a fairway wood on this, specific occasion. Why? Because he was only 174 yards out. The pin is towards the front, so at worst, he’d likely only need to hit a short-to-mid iron. Indeed, Casey, Phil’s playing partner who hit his ball in almost an identical spot off the tee, nudged what looked to be a short-iron to gimme range.

Phil should’ve opted for that route. But he didn’t, he seemed to try to intentionally sky his fairway wood to get it up into the air, which could’ve simply been achieved with a shorter iron. Put simply, it was too much club.

Which is why his ball flew over the green, leaving him with a not-easy up-and-down for par.

But, of course, if he opted for the safe route, he wouldn’t be Phil The Thrill, would he?