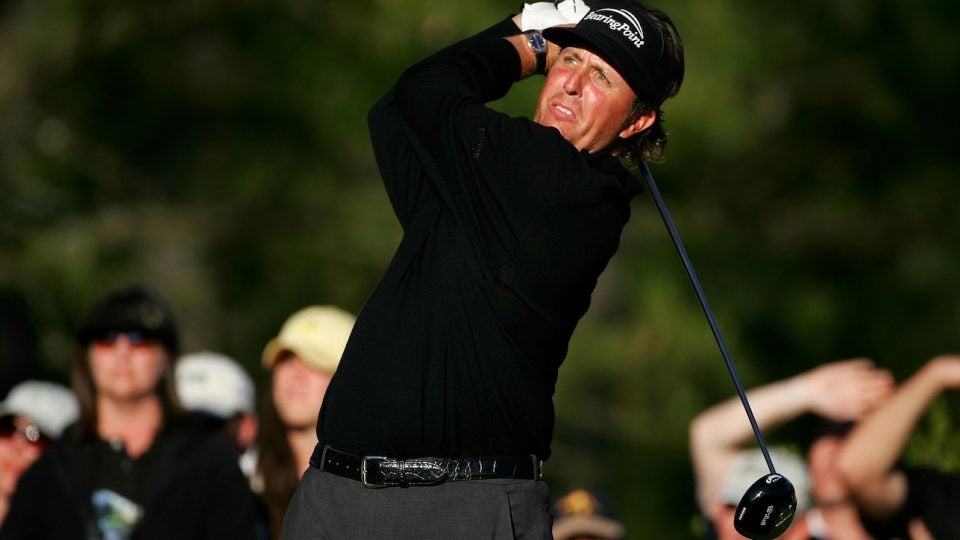 No player has been more willing to throw caution to the wind and embrace unconventional equipment changes at major championships than Phil Mickelson. Over the last decade-plus, Mickelson has done it all from an equipment perspective, employing two drivers on multiple occasions, custom one-off clubs and five wedges — all in the name of finding a perceived edge with his gear setup.

Like a Mickelson flop shot from U.S. Open rough to a short-sided pin, some of the changes have produced spectacular results; others have fallen flat. With Mickelson once again considering a two-driver setup at the U.S. Open, it’s time to look back at some of the five-time major winner’s zaniest equipment changes over the years.

Seeing double at the 2006 Masters

It seems fitting that Mickelson’s first significant equipment change at a major championship produced the second green jacket of his career. Leading up to the 2006 Masters, Mickelson tried out a two-driver setup the week prior at the BellSouth Classic and won by an astounding 13 shots with a pair of 9.5-degree Callaway Big Bertha Fusion FT-3 drivers in the bag.

The goal for Mickelson was to see if there was a benefit to having a driver that produced a cut without altering his swing, and another to execute a gentle fade. At the time, Mickelson was already hitting a fade on command, but the draw shot shape required the shaft on the second driver to be lengthened by one inch — from 45 to 46 inches — and internal weight repositioned to pull off the shot.

“It was a huge help,” Mickelson said of the double-driver experiment. “I needed it to combat the added length here at Augusta. This is the only course that I can think of that I will probably do it, and I did it last week at BellSouth to get accustomed to it. I don’t know where else I’ll end up needing to do that, but it was a huge help here, and I started going to that driver exclusively, only on holes that I thought I would play cuts. Like on 14 and 17, I ended up hitting that draw driver because I needed the extra length.”

Drivers
What’s driving Phil Mickelson? Why Lefty is longer than ever

Mickelson was a trendsetter of sorts when it came to one club in particular: the 64-degree wedge. Lob wedges were a common sight on Tour during the 2006 season, but the standard loft used by most players was 60 degrees. These days, it’s far more common to see a few 64-degree wedges on the practice range.

But during the 2006 U.S. Open at Winged Foot, Mickelson was arguably the only one in the field with something over 60 degrees. Mickelson asked Roger Cleveland to create a 64-degree Callaway X-Tour wedge for various touch shots he anticipated having around the greens and replaced his 3-wood with the lob wedge during the tournament week.

Mickelson was so pleased with the wedge’s performance, he went out of his way credit it for putting him in a position to win his first U.S. Open after 54 holes. We all know what happened to Mickelson on the final day.

“I need it with a certain amount of bounce, I’ve got to hit a lot of high bunker shots out of the sand,” he said. “I have used that club extensively, the only club I’ve used out of the sand, I think, and it has saved me a ton of shots.”

Mickelson went on to make the 64-degree wedge a regular part of his setup and routinely carries a 60- and 64-degree in the bag at the same time. He’s even used five wedges at various points over the years.

On the longest course in U.S. Open history — up until Chambers Bay took the title in 2015 — Phil Mickelson chose the contrarian route and removed the longest club from his bag at Torrey Pines. For Mickelson, the goal was to use his 13-degree Callaway FT Tour 3-wood (bent to 11.5 degrees) and a hybrid to keep the ball in play, avoiding the diabolical rough while allowing the firm fairways to carry his 270-yard drives close to 300 yards. 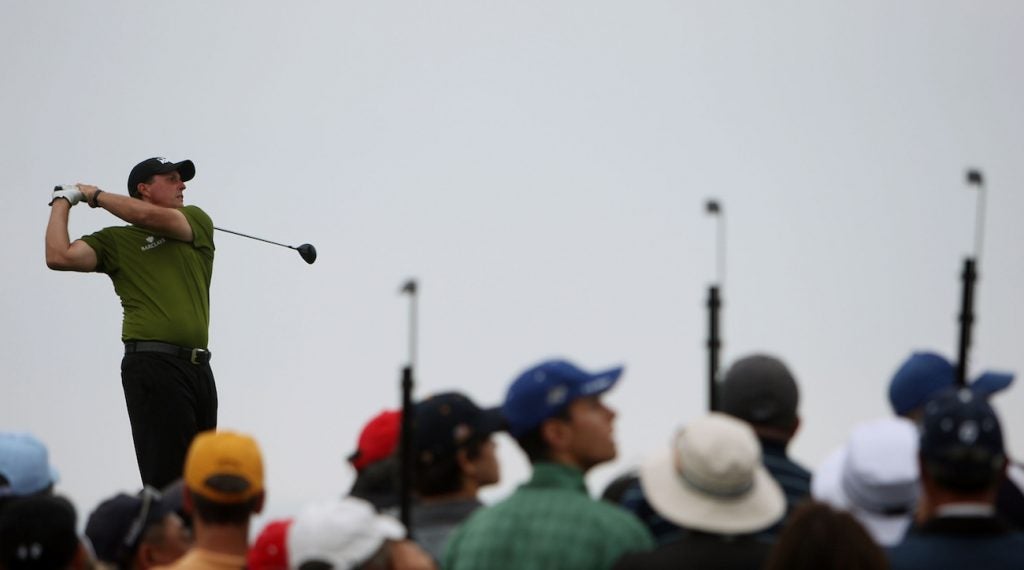 The only problem was Mickelson struggled mightily off the tee over the first two days — to the point that he added driver back over the weekend.

“When I made some terrible swings and hit in the rough it kind of defeats the game plan because now I’m short and crooked,” he said.

The only club change on this list not tied to a major championship, Mickelson replaced his Callaway RAZR Fit 5-wood with a Titleist 980F that was almost a decade old. The 980F debuted in 2003 when Mickelson was still on staff with Titleist.

The following year, in 2004, Mickelson signed a lucrative equipment deal with Callaway and switched to the company’s gear prior to the Ryder Cup at Oakland Hills.

Mickelson delivered on his promise of a “special club” for the 2013 Masters. With only a few months to go before the annual trip to Augusta, Georgia, Mickelson worked directly with Callaway’s R&D department to create a one-off club that allowed him to get ample rollout with the same face cup technology unveiled earlier that same year with X Hot 3Deep — a deep-faced fairway wood Mickelson had been using primarily off the tee. (More on 3Deep in a bit.)

Earlier that same year, Mickelson left Phoenix victorious with Callaway’s RAZR Fit Xtreme driver in the bag, but during testing with 3Deep, he started to notice the fairway wood was going as far with close to the same spin he was generating with his driver.

Looking for a club with the same workability characteristics and face technology as 3Deep, in driver length (45 inches) and loft (8.5 degrees), to take advantage of additional rollout on tee shots at 9, 10 and 15, in particular, Callaway’s R&D department created a smaller-headed driver for Mickelson dubbed “Phrankenwood.”

The club was a blend of Callaway’s current face cup technology with stainless steel and utilized a larger 250cc head geometry — 3Deep was 185cc — and wall thickness.

Mickelson talked a big game prior to the opening round, believing the club could provide an edge over the field. To some extent, he was right. Mickelson ranked sixth in distance (298.2 yards) and ninth in accuracy (71.43) ­— an improvement from his usual stats off the tee.

The end result, however, was anything but memorable. Mickelson finished T-54 for the week, still his worst Masters finish to date.

Phrankewood is remembered for the social buzz it generated, but it was XHot 3Deep that produced on golf’s biggest stage. During the 2013 U.S. Open and Open Championship, Mickelson took a page from the 2008 U.S. Open and played both majors sans driver, figuring he was better off keeping it in play than playing from the rough.

While Mickelson came up short at Merion, site of the U.S. Open, he recorded one of the greatest finishes of his professional career at Muirfield during the Open Championship. The most memorable shots struck that week came on the par-5 17th, where Mickelson used 3Deep off the tee and from the fairway to reach the green in two. 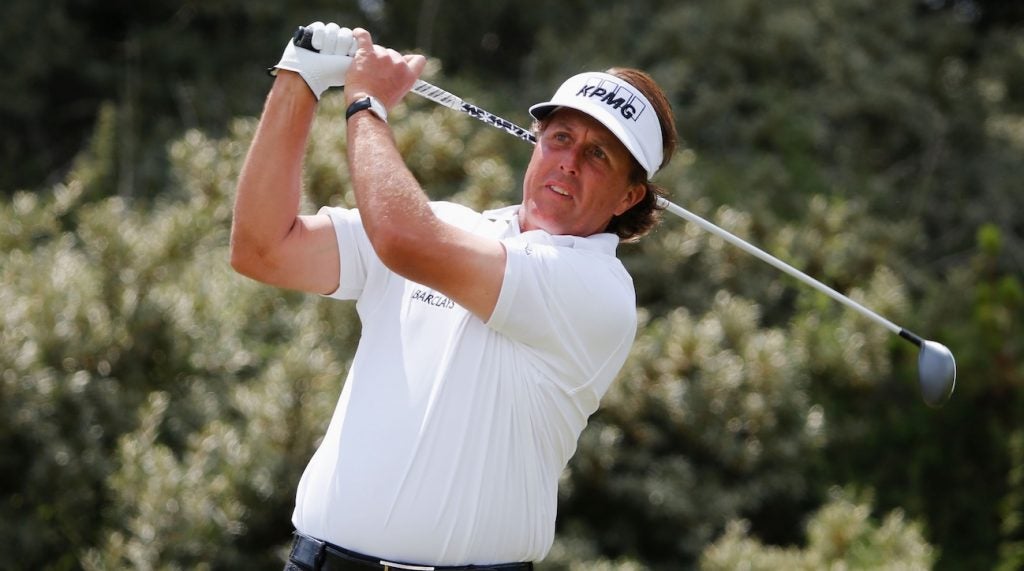 “That is exactly why I don’t have a driver in the bag,” Mickelson said after hoisting the Claret Jug, the last major win of his career. “Those two 3-woods were the two best shots of the week.”

With a face depth that was 10 percent deeper than the standard X Hot fairway wood, Mickelson was able to get the impact location in line with the ball on tee shots to generate drives that routinely went over 300 yards.

When the king of the super-flop requests something special to execute his famous shot, you can be certain Callaway’s chief club designer Roger Cleveland is going to pull out all the stops to make it happen.

Cleveland was tasked with designing a wedge for Mickelson that not only had a higher toe to hit flop shots but featured the company’s U-Grind sole and Mack Daddy 2 grooves.

Accomplishing the design took some skill. Instead of taking a standard Mack Daddy 2 and manipulating the toe, Cleveland had to remove the top half of the wedge and weld on a piece of carbon steel to create the custom high toe.

“When Phil swings hard and opens the face, he sometimes feels like he can go right under the ball,” said Cleveland. “So he wants to feel like he has the confidence to know there’s a face up there that when he does hit that shot it’s going to strike ball.”

Mickelson put an early prototype version of the wedge in play at Valhalla for the PGA Championship, believing it could help him hit high flops around the green.

In typical Mickelson fashion, the two-driver setup is a game-time decision at the 2019 U.S. Open. Mickelson employed two Callaway Epic Flash drivers at the Memorial tournament and led the field in driving distance. But he hit just 53.5 percent of the fairways before missing the cut.

“They’re both 8.5 degrees,” Mickelson said of the drivers. “But the angle of attack, spin rate, I launch this thing at 16 degrees, 17 degrees. You cannot control that. That is such a high launch you can’t control that 14 times a round.

So I put one in that a little shorter, my angle of attack is down, my launch is closer to 11.5, 12 degrees, much easier to control. And I should have a reasonable chance of hitting some fairways with the rest of the year with that club.”

Mickelson hinted he could use the same setup at Pebble Beach, where the opportunities to let the driver fly are few and far between. Following a similar equipment script to the 2006 Masters, Mickelson’s standard length (45 inches) Epic Flash is designed to hit controlled cuts; the longer length version is geared for the “high bombs.”

Whether Mickelson carries two drivers or opts for a more conventional setup, he’s once again the focal point for gear heads at a major championship. Long live the king of equipment changes.