7 reasons why Phireside with Phil Mickelson is the best thing in golf, and could be even better 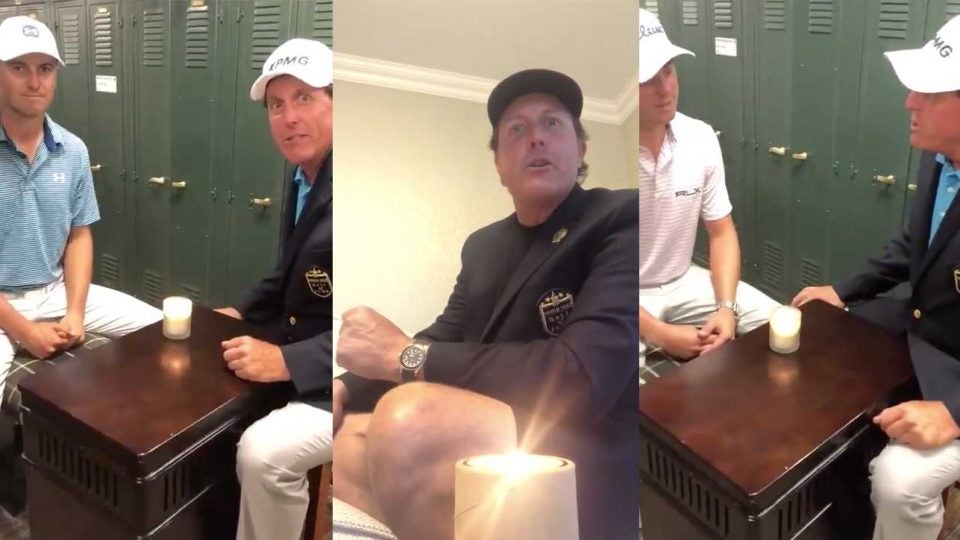 The hit series could become even better with a few hand-picked guests.
twitter.com/philmickelson

If possible, Phil has reached a new high with this week’s show, in which he interviews Larry David. The camera work is shaky, at one point a finger crosses the lens, Larry rambles, Phil stares and it all works. On one level you could say it’s about Larry’s extraordinary history as a world-class junior golfer, cut short by a heinous hand injury, but on another level it’s about nothing. Phil is wearing golf shoes, shorts and his Hall-of-Fame blazer. Of course, Larry should have a blazer, too, and likely would, except for the hand thing. Phil has a deep Rolodex and it makes you wonder: who should Phil have next?

6. Phil and the Presidents

If there’s one talk-show host who could get Barack Obama and Donald Trump on the same sofa, talking about ye olde game and whatever else, it would be Phil. Would you do it, Phil — would you? In the interest of promoting some desperately needed political civility? 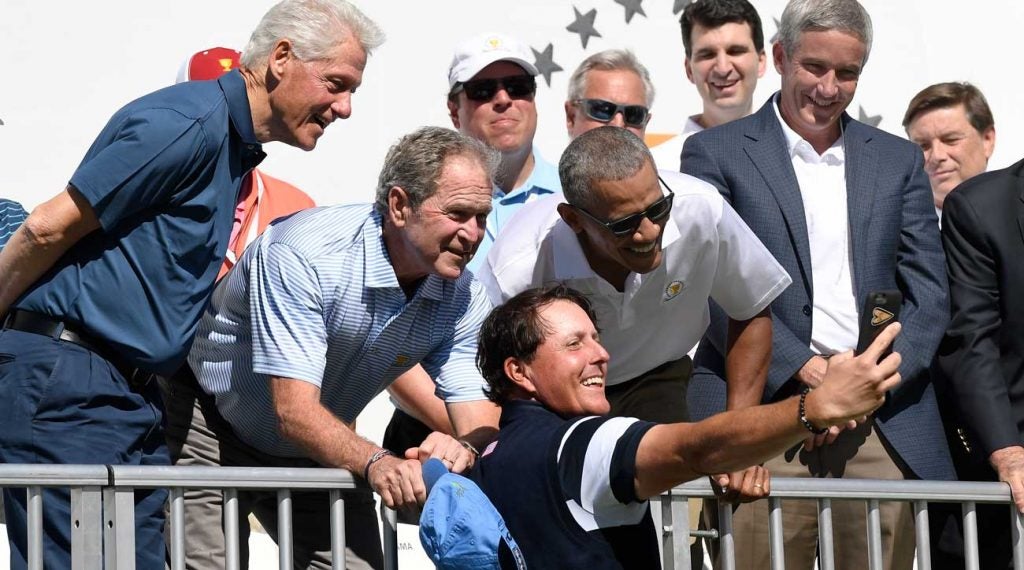 Phil Mickelson was able to bring three past presidents together for this selfie in 2017.
Getty Images

5. Phil and the real Tiger

OK, Phil might have to do the heavy lifting in this one, as Tiger does not love to be interviewed. And it might have to be a co-production with Discovery’s GolfTV, owing to Tiger’s deal with that outfit. And, yes, Phil has already had Tiger on the show once, although Tiger was in a picture frame that time. And still that episode was internet gold. This one could maybe be better. A question to get the ball rolling: “What did you think when Hal Sutton paired us in that Ryder Cup? Because I thought it was great.”

4. Phil and the ladies

Bring ‘em all out, across three generations, for one special show: Barbara Nicklaus, Amy Mickelson, Annie Verret Spieth. A chance for the women to compare notes on various intimate subjects, aided and abetted by Phil. Eg.: How do you handle Sunday mornings at majors when your fella is in contention?

In this episode, Phil interviews the world’s most dominant golfer, Jin Young Ko of Korea, who has won four times already in 2019. This episode of Phireside with Phil will be the first with English subtitles, as Phil has learned to speak fluent Korean for the interview.

Hmm, almost @Stephencurry30. It’s a very technical move, best if I show you in person. I’ll be in Napa next week if you really want #CalvesLikeAdonis https://t.co/93uHBH3qDJ

In the afterglow of their pro-am pairing in Napa this week, Phil interviews Steph Curry mid-court at Oakland Arena. They play catch. They attempt threes with golf balls and 60-degree wedges right off the arena floor. Phil gives Steph a lesson in free-throw shooting. Steph gives Phil a lesson in … something. Phil asks Steph, “Do you think I’d be more effective in the NBA as an owner, GM or coach?”

Did you ever see the episode (2015) where Donald Trump interviews Donald Trump on The Tonight Show? Jimmy Fallon plays Trump on one side of the mirror and Trump plays Trump on the other. Among other things, Trump mentions Kanye West as a potential running mate. In other words, he’s making news. This episode of Phireside with Phil takes its inspiration from that landmark session. Phil asks himself about his chances to be a playing captain at the 2024 Ryder Cup at Bethpage, his plans as a recording artist singing standards from the Great American Songbook and his areas of scholarship as the newest tenured professor in MIT’s astrophysics department.