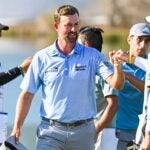 Webb Simpson jumped out in front on Thursday.

We finally got to see the world’s best players take on The Concession Golf Club on Thursday, a rare new venue on the PGA Tour that’s hosting this week’s World Golf Championship-Workday Championship in Bradenton, Fla.

And what did we learn in Round 1? For starters, Webb Simpson and Matthew Fitzpatrick opened with six-under 66s to grab the first-round co-lead, and Brooks Koepka, still only a couple of weeks removed from his win in Phoenix, is five under and one back.

Billy Horschel, Sergio Garcia and Kevin Kisner are also five under; Tony Finau, Patrick Reed and Jon Rahm are in a large group at four under; and Rory McIlroy is three under.

On the other side of the leaderboard, Dustin Johnson, Bryson DeChambeau and Bubba Watson are all five over and have some work to do. But it’s a no-cut event, so there’s still time to turn things around.

How to watch WGC-Workday Championship Round 2 on TV

How to stream WGC-Workday Championship Round 2 online

You can stream the second round of the WGC-Workday Championship on golfchannel.com. Fans can also view Featured Group coverage of the opening round all day Friday via a PGA Tour Live with a subscription.