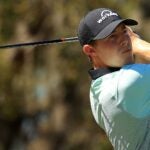 Matthew Fitzpatrick hits a tee shot on Thursday on the 15th hole at the Concession Golf Club.

The co-leaders shot six under. A four-time major champion is five under, and the defending champ and world No. 2 are four under. The Concession Golf Club conceded to some players. The world No. 1 shot five over. The game’s longest hitter did, too. One of golf’s youngest stars shot 12 over. Some players conceded to Concession. Here are three things you need to know after Friday’s first round of the World Golf Championships-Workday Championship at the Concession.

Webb Simpson made seven birdies and Matthew Fitzpatrick six, and each shot a six-under 66 to take a one-stroke lead over Brooks Koepka, Sergio Garcia, Billy Horschel and Kevin Kisner.

“Very pleased with the start,” he said. “I worked on a couple things last week with putting alignment and with my driver, and I saw good things from that today. You always want to see it first round back, but it doesn’t always happen that way, so I was happy to see like tough tee shots with trouble, really stepping up and making good swings. And made a lot of putts today, so that was a good feeling.”

“Yeah, it was a good day today, obviously played well last week as well,” he said. “Yeah, the golf course is in unbelievable shape. The greens are running about 12 on the Stimp — that’s great for me; I love it when it’s like that. I think it makes you think, this golf course, you’ve got to think about where you’re hitting your tee shots and your approach shots. Yeah, you’ve got to be on the ball.”

Brooks Koepka is one back

Koepka, a four-time major champ and the winner two weeks ago at the Waste Management Phoenix Open is one stroke back, as is Garcia, Horschel and Kisner.

At four under Jon Rahm, the world No. 2; Patrick Reed, who won this event last year, when it was played in Mexico; Tony Finau, who lost in a playoff last week; Sungjae Im; Cameron Smith; and Wade Ormsby. Three strokes back are Rory McIlroy, Joaquin Niemann, Scottie Scheffler, Louis Oosthuizen, Sebastián Muñoz and Victor Perez.

Among other players, Dustin Johnson, the world No. 1, shot a five-over 77; Bryson DeChambeau, who won last year’s U.S. Open, also shot a 77; and Matthew Wolff struggled to an 11-over 83, then withdrew.