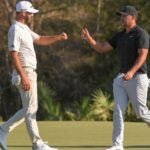 Dustin Johnson and Brooks Koepka fist-bumped on the final hole of the day.

BRADENTON, Fla. — When Brooks Koepka is playing the sort of golf he played on Thursday, he makes the game look easy. He makes it sound easy, too.

Before his opening round at the WGC-Workday, Koepka had played Concession’s front nine once — in Wednesday’s pro-am. He hadn’t seen the back nine at all, until he, former college teammate Daniel Berger and former workout partner Dustin Johnson stepped onto the 10th tee for their 11:42 a.m. starting time.

“I mean, Rick walked it, I get a yardage book, it’s not too difficult,” he said, referring to his caddie Ricky Elliott. “I don’t think anything of it. It is what it is. You’ve got to look up on the tee and you know on 10 that there’s water’s right, there’s bunkers on the left, so put it in the fairway.”

Koepka actually missed the fairway with his opening tee shot, finding a fairway bunker on the left. He also three-putted No. 16 from just 12 feet, resulting in a sloppy bogey. But nearly everything else about his game looked nearly flawless, and Koepka made six birdies against that lone bogey for a ho-hum five-under 67 to leap into contention, one shot back of the 18-hole lead.

The grouping with Johnson felt significant for several reasons. It was the first time the two had played together since Koepka’s comments at last summer’s PGA Championship, when Koepka seemed to throw shade at Johnson’s ability to close and later called their friendship “overplayed.” Since then, Johnson has won the FedEx Cup and the Masters, finished no worse than 11th place and ascended to world No. 1, a title he now owns by a wide margin.

Koepka has fallen outside the top 10 in the world in that same stretch and has split with his coach, added new equipment, worked through pain and tears and rehabbed extra-hard to get fully healthy. The process seems to be paying off; he won in Phoenix and showed glimmers at the Genesis. Still, there’s no question that Johnson has seized back top-dog status.

But golf is a fickle game, and it was Johnson, not Koepka, who spent the final minutes before Thursday’s round grinding on the range, struggling with driver, hitting fades and snap-hooks, struggling to dial things in. Concession is unforgiving off the tee, and Johnson took those struggles to the course, finding just four fairways along the way.

He and Koepka gave little more than the required fist-bump on the first tee and chatted only occasionally during the round, but it’s hard to know how much to read into that. When one guy’s shooting 67 and the other 77, they exist in different mental stratospheres. (Berger, for his part, split the difference with one-over 73.)

“It’s nice to play with them,” Koepka said after the round. “Obviously DJ’s the best player in the world, so he didn’t exactly play like it today, but you know he’s going to come back out tomorrow and play good. And I always enjoy playing with Berger — it’s fun, get some laughs.”

The event marks Koepka’s fifth start in six weeks, but even though he lives on the opposite coast, he grinned just at the idea of being back in Florida. Koepka grew up in West Palm Beach. He went to college in Tallahassee. He lives in Jupiter. He’s no fan of non-Florida things like cold weather, poa annua grass or hot beverages (seriously — Koepka has never consumed a hot drink).

On Thursday, Koepka said he felt particularly good on the greens, and it showed: He made 112 feet of putts and gained nearly three strokes on the field on the greens.

“I don’t know if it’s just a couple of the changes I’ve made in putting, or just being on bermuda, it could be either one, I’m not quite sure, but it does feel nice to be on bermuda, that’s for sure,” he said.

He drove it well, too. Koepka said the course reminded him of the courses he plays most often on Florida’s east coast: Medalist, Bear’s Club, Floridian.

“I don’t think too much. I just try to keep it pretty simple,” he said. “If it’s 300 yards to the bunker or there’s a bunker that cuts out, OK, then it’s just 3-wood. I just try to make golf as simple as possible — and I think that’s where some of the confusion with me gets thrown in there. I try to make it very simple and I don’t overcomplicate it.

“I’m not thinking the club’s got to be in a certain position to do this, do that; I just get up there, see it and go hit it.”

If that comes across as overly confident, that’s the “confusion” Koepka is referring to. He thinks honest, listeners think cocky. That happens sometimes. And it stems from the fact that all of this is a lot easier for Koepka than it is for the rest of the world. Golf is simple for him because he’s just that good.

There’s a world where Thursday marks a turning point in Koepka’s season, where it marks the beginning of his ascension back to the world’s top spot. There’s also a world where it means nothing at all; his 67 was just one round, as was Johnson’s 77. A blip in a fast-paced PGA Tour season. We’ll know more when we look back in a few months, when more pages of Koepka-Johnson have been written.

The next chapter begins tomorrow.