Tiger’s stunning bunker shot and the other best things in golf this week, ranked 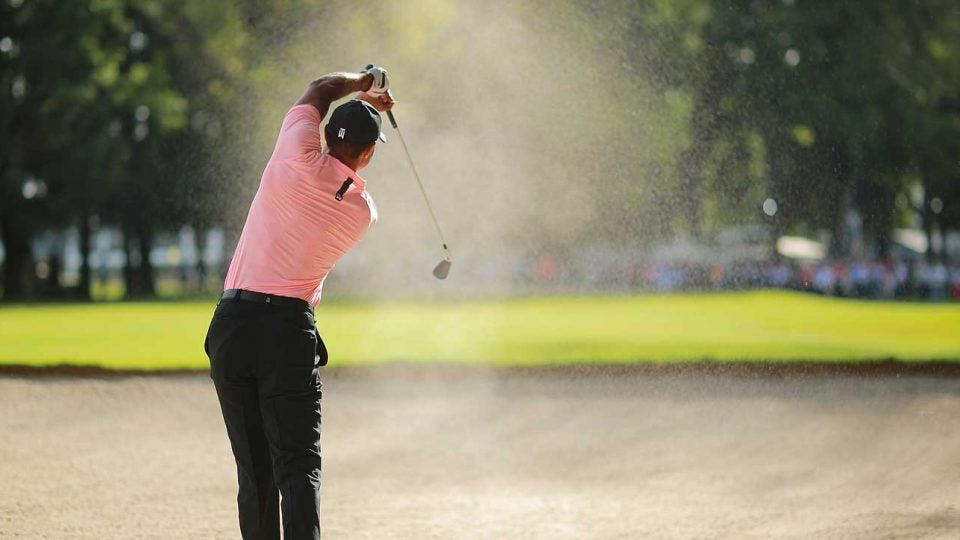 Tiger Woods's now famous bunker shot would have been even more memorable if he followed it by making the birdie putt.
Getty Images

7. And They Were Swinging

This is a swing: Honda (Palm Beach Gardens) this week, Bay Hill (Orlando) next. Then the Players in Ponte Vedra Beach followed by the Valspar in Tampa. Four straight events in the Sunshine State. The Florida Swing. Somebody just might play all four, and not get in a plane for a month. Likely somebody who is not in the Masters yet, nor in the WGC events. There will be a special GOLF.com prize for low Florida Swinger. Must be 18 years of age and play 288 holes to qualify. (Playoff scores, if there are any, will not be counted.) Ties will be broken by a match of cards starting at the Honda. Watch this space for more details.

Ernie Els, playing this week at Honda, used to drive his daughter, Samantha, to school in the morning while playing Queen. You likely saw that the actor Rami Malek won an Oscar Sunday night for his portrayal of Freddie Mercury of Queen in Bohemian Rhapsody. But Malek did not do his own singing in the movie. A singer named Marc Martel sang as Mercury in the movie, with remarkable fidelity. (If only golf worked this way, if you could bring in Matt Kuchar to play your little pitch shots and chips while playing in your club championship.) Martel has an album of Queen covers called “Thunderbolt & Lightning” and an unexpected second career, standing in for the late Mr. Mercury. This is from a recent New York Times write-up on Martel: “[Martel] recalled a recent conversation with his manager, who told him, ‘I’d like you to consider your songwriting the way I view my golf game — I love playing golf, but it’s not what’s paying the bills right now.’ That was hard for Martel to hear, but he ultimately accepted its wisdom.

‘The next five years, there’s going to be a lot of Queen,’ he said, and chuckled. ‘But at the same time, I’m going to work on my golf game.’” The secret’s in the dirt and, for the original Freddie Mercury, his four extra teeth.

Peter Farrelly directed Green Book, which won an Oscar for Best Picture. Despite its name, there’s not a nod to golf in it. Farrelly (and his brother, Bobby) put Brad Faxon in Kingpin. Cameron Diaz hits stripers at a driving range in There’s Something about Mary. Owen Wilson plays golf after eating special brownies in Hall Pass. Hopefully, the auteur will soon return to form.

The slicing, spinning 9-iron shot Tiger Woods played to 12 feet from a bunker on Friday in Mexico City brought to mind Jim Thorpe, for the club-down hold finish, and Tiger Woods his own self, for the audacious talent and forethought it took. It needed only one more thing to elevate it: for the ensuing birdie putt to drop. As another touring pro with a finger in Buddhist teachings, Peter Teravainen, used to say, “Good shots must come in groups of two.”

The decision.
The shot.
The execution.

Ted Bishop, the outspoken former PGA of American president, came rushing back to mind last week when he wrote an insightful GOLF.com piece about Steve Stricker as the Ryder Cup captain. Bishop’s bio blurb noted that he was the 38th president of the PGA of America. As it happens, the Honda event this week is played at a course owned by the PGA of America, PGA National. The 41st and current PGA president, Suzy Whaley, is the first female president of the organization. Bishop’s two-year term has been all but wiped clean from PGA history and he enjoys none of the privileges that come from being a former president, like an invitation-for-life to the Ryder Cup! You might recall his offense: In a post Ryder Cup tweet in 2014, Bishop called Ian Poulter a “Lil girl.” Yes, it was an inane thing to write. But our language, via Twitter and otherwise, has been so debased since then if Bishop or anybody else wrote that today it would be a pebble in an ocean. The point here is this: isn’t it time for Bishop to be brought back into the fold, where he can have his place of honor among former PGA Presidents including George Sargent, Ed Dudley and Max Elbin? Suzy Whaley, an accomplished player and a bright leader in golf, would be the ideal person to do it, or at least initiate it. #rehabilitation.

Max Elbin was the president of the PGA of America when the touring pros broke off and formed their own organization, in 1968. Elbin wisely had the PGA of America hold on to the rights to the Ryder Cup. Ed Dudley was the longtime pro at Augusta National. George Sargent was the winner of the 1909 U.S. Open and, in the 1930s and ‘40s, the head pro at East Lake. You could make the case that East Lake is the most underrated course on Tour. As a starting point, without East Lake, there’s no Augusta National. You could also say, without East Lake, there’s not Bobby Jones. If this subject interests you, you will likely enjoy the new edition of an older book called East Lake: Where Bobby Learned to Play, by Linton C. Hopkins.

The biggest name in the Honda Classic this week is Greg Norman. Yes, he’s playing. In the Wednesday pro-am. He’s 64 and can still drive the ball on a string.