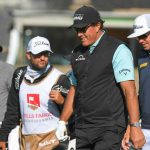 Phil Mickelson is only three shots back at the Wells Fargo Championship despite a second-round 75.

The 2021 Wells Fargo Championship is already at the halfway point, and continues on Saturday, May 8, with the third round at Quail Hollow. You can find full third round tee times at the bottom of this post.

Notable pairings for Wells Fargo Round 3

Phil Mickelson made a big splash with an opening round of seven-under 64 on Thursday to lead the tournament by two shots. It was the first time Mickelson had a lead or co-lead after a first round since the 2019 American Express. Unfortunately, Friday’s round wasn’t as kind, and a score of four-over 75 dropped Lefty a few slots down the leaderboard. He’s by no means out of it, though. At three-under overall, he’s only three shots behind leaders Matt Wallace, Gary Woodland and Patrick Rodgers, who are tied at the top of the leaderboard at six-under.

Rory McIlroy surged 68 spots up the leaderboard on Friday by firing one of the best rounds of the day, a five-under 66, to reach four-under overall — only two shots back. McIlroy is seeking his third victory at Quail Hollow. He’ll play the third round with Scott Piercy at 1:25 p.m. ET.

Check out the full third round tee times for the 2021 Wells Fargo Championship below.