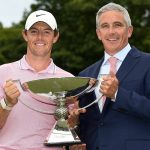 With reports surfacing that the SLG is once again trying to poach top players from the PGA Tour, Rory McIlroy once again condemned the proposal.

After hibernating for much of the last 15 months, speculation around the proposed golf super league has awoken from its slumber.

A source told GOLF.com that the league has already draw up plans for five events in 2022 with fields comprised of top players in the world golf rankings who would receive upward of $20 million just for playing.

Among those invited, according to the source, are Dustin Johnson, Justin Thomas, Brooks Koepka, Jordan Spieth and Hideki Matsuyama. A notable omission to the invite list? Rory McIlroy. The 32-year-old has long been critical of the proposed league, and this time around is no different.

“People can see it for what it is, which is a money grab,” McIlroy said ahead of the Wells Fargo Championship, doubling down on remarks he made in 2020. “I’m playing this game to try to cement my place in history and my legacy and to win major championships and to win the biggest tournaments in the world.”

McIlroy said that the would-be super league first approached him in 2014, and his position has not changed since.

When the four-time major winner was asked 15 months ago what his opinions were on the league, he minced no words saying, “I would like to be on the right side of history with this one,” seemingly a nod to the Saudi funding of the league.

The exclusion of up-and-comers from the super league was another point McIlroy made against the concept. With only a few top-name players invited, it would make breaking into the ranks all the more difficult.

McIlroy used former Wells Fargo winner Derek Ernst as an example of this theory. The journeyman was a Korn Ferry Tour pro at the time but snuck into the field at the last minute. He went on to win that week and earned his Tour card, along with invites to the Masters, the PGA Championship and the Players.

“That’s a life-changing week for him,” McIlroy said. “He wouldn’t have that opportunity if something like the SGL got off the ground.”

There may be no more powerful voice in golf than McIlroy, so these remarks are telling. Just as it has been since he joined full time, McIlroy — who is now president of the Player Advisory Committee — is a company man when it comes to the Tour.