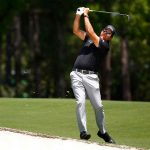 More than two years have passed since Phil Mickelson’s last PGA Tour victory at the 2019 AT&T Pebble Beach Pro-Am — the 44th Tour win of his decades-long career. And it’s been even longer — 840 days, according to the PGA Tour statisticians — since he’s had a lead or co-lead after a tournament’s opening round.

In the years since, the now 50-year-old has contended a couple of times (a close call during his AT&T Pebble Beach Pro-Am title defense in 2020, where he eventually finished third, and a runner-up finish at the WGC Fed-Ex St. Jude) but more often than not, the famously mercurial player finished in the middle of the pack, or missed the cut, which lately, he’s been doing about half the time.

But this week, so far, it’s Phil the Thrill steering the ship, and Mickelson holds a two-shot lead at the Wells Fargo Championship after an opening-round 64 — seven under par. Mickelson carded a total of eight birdies on Thursday, and only one bogey.

In the 13 PGA Tour events Mickelson has played since September, he’s missed the cut in six, and has yet to crack the top 20 in any event. Last week, after firing 73-69 to miss the cut by one shot at the Valspar Championship, Mickelson opened up about the mental issues that have been afflicting his game.

“I just kind of go mind numb and my ability to regain focus has been the biggest challenge as I’ve gotten older,” he said. “I’m not physically able to keep my focus. And that’s my challenge right now, and I’m trying to come up with — I’m trying all different things to be able to elongate my ability to stay focused or to refocus.”

Mickelson hasn’t shot a 64 or better on the PGA Tour since last year’s Travelers Championship. Clearly, something clicked for Lefty today. What was it?

“Just focus,” Mickelson said after his round on Thursday. “I’m just present on each shot. This course holds my attention. I’ve been doing some like, you know, some mental exercises and so forth just to try to get my focus to elongate over five hours and so forth. That’s been a real struggle for me the last few years because physically, there’s nothing physically holding me back from playing at a high level, but you cannot make mistakes at this level. The guys out here are just so good, and I’ve been making a lot of errors, just simply not being mentally sharp.”

Can Mickelson hang in through three more rounds for win No. 45? He does have some positive history on his side at Quail Hollow. In 16 prior appearances, he’s finished in the top five eight times.

Regardless of what happens, one thing’s for sure: Phil is always fun to watch.