Rules School: Here’s what is (and isn’t) allowed when playing out of a bunker 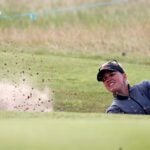 There are certain things to keep in mind if your ball is in the bunker.

The U.S. Amateur at Bandon Dunes has been a joy to watch for viewers at home, but there was also a bit of controversy during the Round of 16 on Thursday night.

Segundo Oliva Pinto and Tyler Strafaci came to the 18th hole all square in their match, and both men hit their approaches near the green. Oliva Pinto was in the greenside bunker, and his caddie jumped down into the hazard to check out the situation. He then brushed the sand with his hand.

There was just one problem — that act, falling under the definition of testing the condition of the sand, is illegal under Rule 12.2b. We’ll go over that and more in this week’s edition of Rules School, as we explain what is (and isn’t) allowed in a bunker.

If your ball is resting on a loose impediment, you are allowed to move the object. However, there are certain restrictions. Rule 12.2b states, “you must not deliberately touch sand in the bunker with your hand, a club or rake or any other object to test the condition of the sand and learn information for your next stroke.” You are also forbidden from touching the sand with your club in making a practice swing or making a backswing for your stroke.

The penalty for breaches of Rule 12.2b are a two-stroke penalty in stroke play, or, in Oliva Pinto’s case, loss of the hole in match play.