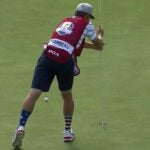 Try as he might, DeChambeau's caddie was not able to dislodge the flagstick from the cup.

Bryson DeChambeau has not even played a full round at the Ryder Cup yet, but he’s already made a ton of headlines. From his spectator-plunking birdie on the 1st, to his mammoth drive at the 5th, each time he’s stepped to the ball, something worthwhile has happened.

At the 6th hole, fans got yet another encounter, albeit this was an odd one.

As DeChambeau lined up his birdie putt on the par-4, he asked his caddie, Brian Zeigler, to tend the flagstick. But as DeChambeau’s ball rolled toward the cup, Zeigler ran into a slight issue — the flagstick wouldn’t budge.

Try as he might to dislodge the flagstick from the hole, it never did come free. The moment sent analysts Justin Leonard and David Feherty into a brief panic as the ball approached the cup, but ultimately, the ball ran out of steam before it reached the hole.

Check out the incident below.

But despite Leonard and Feherty’s panic about a potential penalty narrowly avoided, DeChambeau was not at risk for a rules violation — even if his ball had careened off the flagstick. Brad Gregory of the PGA of America clarified the situation on the broadcast.

“If the player’s ball in motion accidentally hits the flagstick or the person who removed or is attending it (or anything the person is holding), there is no penalty, and the ball must be played as it lies.”