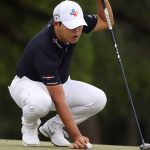 Si Woo Kim's broken putter at the Masters was not only embarrassing, but also put him in a bit of a tough spot with the Rules of Golf.

Si Woo Kim got himself into a bit of an awkward situation on the second nine of his second round at the Masters. Despite being just three shots off the lead, Kim let his temper get the better of him on the 15th green.

Following a three-putt at the 14th hole, Kim was already running a bit hot, and when he hit a lackluster chip onto the 15th green, his anger boiled over. He slammed his putter into the ground and bent the shaft. And he did so badly enough that he found it unusable.

This was not only an embarrassing blunder for the 25-year-old, but it also put him in a bit of a tough spot with the Rules of Golf. Although the rulebook has become more lenient about the rules of broken clubs, they still offered him no reprieve for his mistake.

Broken and damaged clubs are covered under Rule 4.1 in the rulebook, which states, “if your conforming club is damaged during your round or while play is stopped, you may continue to make strokes with the damaged club for the rest of the round, or have your club repaired by restoring it as nearly as possible to its condition before the damage happened.”

However, the rule also states that “a player is not allowed to replace a damaged club, except when it is damaged during the round by an outside influence or natural forces or by someone other than the player or his or her caddie.”

Because of this, Kim was not able to replace the putter during the round, hence his decision to putt with a 3-wood for the remainder of the day.

Luckily for Kim, the mistake did not result in any dropped shots on the scorecard. After the break, he made four pars in a row to close his round and will remain in the top 10 heading to the weekend. We are guessing he’ll have a new putter come Saturday, too.