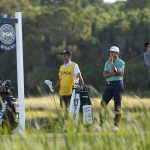 Competing in his first ever major championship, John Catlin was assessed a penalty for slow play during the first round of the PGA Championship.

For the contingent of fans clamoring for enhanced pace of play enforcement in professional golf, the start to the PGA Championship had a nice surprise in store.

John Catlin was assessed a rare slow-play penalty during his opening round at the Ocean Course on Thursday and was docked a stroke for the breach.

The 30-year-old was penalized under Rule 5.6b, which states, “when it is your turn to play, it is recommended that you make the stroke in no more than 40 seconds after you are able to play without interference or distraction. You should usually be able to play more quickly than that and are encouraged to do so.”

Catlin bogeyed No. 3 after the penalty to drop him to three over for the day. He finished with six straight pars coming home and signed for a 75 at the end of his opening round. He’s currently six shots back of the three-under lead posted by four players in the morning wave.

Although Catlin has won three times on the European Tour, this is his first appearance in a major championship. He (along with Rickie Fowler) received a special invitation to compete at the Ocean Course on the strength of his play in Europe over the last year.

Check out these hot-selling items from our Pro Shop