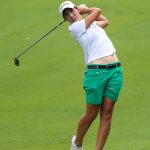 Although Carlota Ciganda won the 18th hole in her match with Sarah Schmelzel, she lost her match as a result of a slow-play penalty.

Slow play is an issue bemoaned by all golfers, and at the highest ranks of the game slow players are under an enhanced microscope. This week, that microscope resulted in a costly slow-play penalty at the Bank of Hope LPGA Match Play hosted by Shadow Creek.

After a hard-fought match between Carlota Ciganda and Sarah Schmelzel, the pair came to the 18th hole tied. Ciganda won the hole, giving her a 1-up victory in the match. However, after the conclusion of the hole she was assessed a slow-play penalty (general penalty) under Rule 5.6a. In match play, any general penalty is a loss of hole, according to Rule 3.2a.

As a result, Schmelzel was awarded the hole, giving her a 1-up win for the match. The breach was first reported on Twitter by Golf Channel’s Tom Abbott and later confirmed by the LPGA Tour. The Tour would later issue the following statement:

“On the 18th hole of her Day One match, Carlota Ciganda was assessed a loss-of-hole penalty for a breach of the LPGA’s Match-Play Pace of Play Policy. Per the policy, a player is subject to penalty if she exceeds the allotted time for her total strokes taken on a hole by more than 10 seconds, averaging 30 seconds per shot. Ciganda exceeded the allotted time for the number of strokes taken on the 18th hole.”

This is not the first high-stakes slow-play penalty the LPGA Tour has handed down this year. Earlier this season, rookie Yealimi Noh was hit with a massive $10,000 fine for egregious slow play at the Kia Classic.

According to a report by Golfweek, rules officials gave Noh bad times on two holes prior to the fine. The cost of the fine was compounded due to a previous slow play penalty Noh received in her first LPGA event last year.

The PGA of America also handed down a penalty for slow play recently as John Catlin was penalized at last week’s PGA Championship. However, because that event was stroke play as opposed to match play, his penalty was just one stroke.