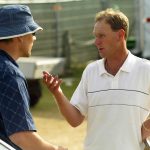 Mark Roe was in position to contend for his first major championship in 2003 at Royal St. George's until a rules blunder resulted in a DQ.

The 2003 Open Championship at Royal St. George’s is known for the Cinderella story that transpired as long-shot Ben Curtis held off a star-studded list of challengers to claim his only major victory. However, there was another Cinderella in the mix on the weekend until an unfortunate rules blunder dashed his major championship hopes.

Mark Roe was the quintessential journeyman heading into the 2003 Open. He’d played over 20 years as a professional, and even registered a few wins along the way. The championship was his 14th appearance in a major — most of them coming at The Open — although he’d never seriously contended for the coveted crown. But at Royal St. George’s, things changed.

Roe began the championship with a lackluster round of 77, but in Round 2, he started to get things going. The then-40-year-old fired a second-round 70 — one of the best scores of the day — to vault up the scoreboard and get inside the cut line. His third round would be even better.

Paired with Swede Jesper Parnevik, Roe tied for the round of the round of the tournament on Saturday at Royal St. George’s. Although moving day had plenty of scoring opportunities, no one (other than Nick Faldo, who also shot 67) could match the journeyman’s low round. When he walked off the 18th green, Roe was one-over par for the tournament and just two shots behind Thomas Bjørn’s lead.

Little did he know that the high wouldn’t last long.

As is customary after each round of tournament golf, Roe and Parnevik entered the scoring area, added up their scores and signed their cards. Then, Roe left the scoring area and was whisked into various interviews. But after the interviews ended, Parnevik approached Roe.

“There’s a problem with the scorecard,” Parnevik told him.

Unbeknownst to either man, Roe and Parnevik failed to exchange scorecards before the round. Parnevik’s scores were marked on Roe’s card, and Roe’s score marked on Parnevik’s. Under then Rule 6-6D, the two men were disqualified for signing an incorrect scorecard.

In an instant, Roe’s hopes of lifting the Claret Jug were dashed.

But even as his playing partner pleaded his case, Roe took the disqualification in stride.

“In all honesty, you are responsible for your own scorecard,” Roe said. “But I’m the only person to blame.”

As a result of the scoring snafu, the R&A changed the rules two years later to protect players from this type of incident. The governing body said tournament committees would be allowed to accept administrative errors when the correct scores had been recorded on the wrong card.

“I think it [the decision] is a great move,” Roe told reporters after the change. “I am really pleased that something good has come from my mistake.”

But even with the new rule, Roe would never get another chance at the spotlight. He never played in another major championship after the 2003 Open Championship.