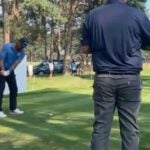 Michael Campbell was allowed a rare mulligan at the Senior Open Championship.

Golf purists will claim that you should never take a mulligan, but sometimes they’re necessary — and even legal. A prime example of a legal mulligan happened Thursday during the opening round of the Senior Open Championship.

Michael Campbell placed his ball on the tee and readied to hit his tee shot with a fairway wood. As he’s done thousands of times before, he then started his pre-shot routine. He drew the club back for an abbreviated swing and followed through.

There was just one problem, instead of whooshing the air just above the ball, his wood made center contact with the ball and sent it shooting down the fairway. All he could do was laugh and get ready to re-tee.

Campbell was allowed to take a mulligan during competitive play thanks to a little-known loophole in the Rules of Golf. Although hitting a ball with your practice stroke is a penalty in the general area or on the green, the rules are slightly different from the tee box.

This is the USGA’s explanation on such instances:

“When you are playing a ball from the teeing area, the ball is not in play until a stroke is made at it. This means that when your ball is teed or on the ground in the teeing area and you make a practice swing that accidentally strikes and moves the ball, you have not made a stroke or moved a ball in play. The Rules allow you to simply re-tee that same ball or another ball without penalty.”

This isn’t the first time in recent memory that a major winner has been saved by Rule 6.2b. At the 2019 Masters, Zach Johnson had a similar scenario play out when he accidentally hit his ball off the tee on the 13th tee box at Augusta National.

Alas, even a mulligan couldn’t help Campbell at the Senior Open as he fired a five-over 75 in Round 1. But he was still a good sport about the strange ordeal.

“Pretty much sums up my day today,” he said on Twitter. “@ZachJohnsonPGA I know how you felt.”