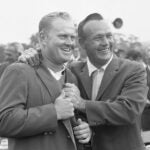 Jack Nicklaus and Arnold Palmer have influenced Dan Rooney's life more than any other golfers.

On Friday, this space was devoted to Lt. Col. Dan Rooney’s insights into two of the most extraordinary golfers in the history of the U.S. Open, Phil Mickelson (with six second-place finishes) and Tiger Woods (with three wins). As it happens, both have been winners at East Lake, where the fellas are gathered this weekend.

Rooney, an Air Force fighter pilot and former college golfer, follows the PGA Tour closely, but this weekend he is otherwise occupied, as Labor Day weekend overlaps with Patriot Golf Day, a charity Rooney supports, a series of golf outings that raise money for scholarships for military personnel and their families.

Today, Rooney, who played college golf at Kansas before beginning his Air Force career, discusses the two players who influenced his life more than any others. The first is Arnold Palmer. Rooney took up golf because his father was a golfer. His father became a golfer because of Arnold Palmer. Arnold won one U.S. Open, in 1960, at Cherry Hills. In Arnold’s case, one was enough. His U.S. Open win helped define the rest of his life.

The other is Jack Nicklaus, the only living four-time U.S. Open winner.

Here’s Rooney, who flew F-16s in combat as an Air Force pilot, on Palmer, his comments edited for clarity:

“Arnold was a great pilot. He loved that last plane he had, a Citation X, the fastest business jet in the world. He had flown F-16s, knew all about them. Flying was his thing. Flying, and talking about flying.

“I once said to him, ‘Mr. Palmer, I like to ask successful people for advice. What advice would you offer?’

“He said, ‘Major Dan’ — I was a major then and that’s what he called me — ‘my major advice to you would be to slow down.’ He was getting older then. And it was such an insight. Because I never slowed down enough to enjoy the individual moments of life. The tempo of life is so fast. It goes too fast.

“Arnold on the course was a maverick. A character in the game and a maverick of the game. Arnold was a fighter pilot on the course. He could be reckless. He was always aggressive. He was amazing. His golf perfectly matched his personality. His golf was a perfect mirror of who he was. And I think that’s why he won. There was no conflict within him, no fear of failure. In the Air Force we say, ‘If you’re gonna bend some metal, you’re gonna screw up sometimes.’ That’s OK. That’s how Arnold played.”

And here, finally, is Rooney on Big Jack:

“Jack Nicklaus is one of my heroes. We’re doing a project American Dunes Golf Club, in Michigan, in Lake Michigan. It’ll be a home for Folds of Honor. It will have a church. It will have a really special public golf course. It’s where I grew up playing. The course almost went under. They were going to turn it into real estate. And now it’s this really special public course.

“In Israel, where Jesus went they built churches. In reverent places, they built houses of worship. And that’s what my goal was here. So first I pitched the idea to Scott Tolley, Jack’s gatekeeper. He’s the filter. Then I got to Jack. I told him my story. He asked a series of questions that were like lasers, starting with, ‘What’s the financial situation of the course?’ Then, once he was in, he said he’d waive his fee. Jack Nicklaus! The greatest of all-time. This was the Armageddon of Awesome. Jack basically designed every hole by hand. He sketched every tee, every fairway, every green. Barbara [Jack’s wife] came out. She wanted to see the course. He said to her, ‘You’ve never been on a site visit before. Why now?’ She said, ‘You’ve never built a place like this before.’ I think of Barbara as the divine influence in Jack’s life.

“I’ve never met a human being that has accomplished more than Jack, in terms of personal life and professional life. You could see that he had a sort of emotional disconnection from his bad shots. He never saw one. He saw the good ones, first in his mind’s eye, then he played them. That kind of selective memory is incredibly useful. The focus he had on what he wanted to do. He has those eyes that will cut through you. I’ve never been nervous around anybody in my life, except for Jack Nicklaus.”

There’s a quote from Nicklaus on the American Dunes website that Rooney holds dear: “I love the game of golf, but I love my country even more.”