How Tiger Woods and Phil Mickelson think differently, according to a military expert 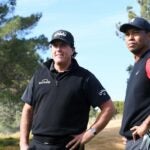 Tiger Woods and Phil Mickelson have been on-course rivals for much of their careers.

On Thursday, this space was devoted to Lt. Col. Dan Rooney’s insights into a variety of U.S. Open winners, some of whom are at East Lake this week with Winged Foot on their minds: Gary Woodland, Brooks Koepka, Dustin Johnson, Jordan Spieth, Martin Kaymer, Webb Simpson. Rooney has earned his insights into the world’s best players, and the world’s most demanding golf tournament (our national Open), the hard way. He’s a former college golfer. (University of Kansas.) He flies F-16s. (U.S. Air Force.) It’s because of his insights that he’s been in so many golf team rooms over the years.

Today, Rooney offers to his insights into two remarkable golfing figures, with 48 U.S. Open starts between them and both of whom have won at East Lake.

The first is Tiger Woods, a public golf-course golfer who has won three U.S. Opens on public courses. (Pebble Beach, Bethpage Black, Torrey Pines.) No other active player has won more than one U.S. Open. Only one living person has four U.S. Open wins, Jack Nicklaus.

The second is Phil Mickelson, who has a U.S. Open record that is unlikely to ever be duplicated, what with his six second-place finishes. You’d almost think it wouldn’t be possible.

The guys at East Lake — not Tiger, not Phil — will wrap things up on Monday, take a week off, and head to Winged Foot. The last time the Open was at Winged Foot was in 2006. Tiger missed the cut, just weeks after the death of his father, Earl. It was the first time Woods missed a cut in a major as a pro.

That was the most painful of Mickelson’s seconds, as he made double-bogey on the last hole, in the last group, to finish one shot behind the winner, Geoff Ogilvy.

Phil’s father, Phil Sr., was a U.S. Navy pilot. Earl Woods retired from the U.S. Army after 20 years of service as a lieutenant colonel.

Here (and edited for clarity) another military man offers his thoughts on Tiger Woods and his greatness in U.S. Open play. Woods, who won U.S. Opens in 2000, 2002 and 2008, has long supported a variety of military charities. Here’s Dan:

“I played in two NCAA championships that Tiger played in. I’ve been watching him contend and win for half my life. Watching him, knowing what I know about him, I feel like I have an authentic insight into his golf. It comes down to this: He has the mindset to succeed in pressure situations. From the time he was a little kid, Tiger’s dad was spoon feeding him his own life as a Green Beret. As a soldier. Tiger grew up to become a warrior on the golf course.

“What are the costs of that? Man, that hits close to home. If you have that warrior mentality, it takes over your life. The Air Force motto is Service Before Self. You’re married to your jet. When you’re in the Air Force you forfeit three-quarters of your rights. You’re saying, ‘This is the most important thing in my life. Period.’ And for a lot of years you could see a lot of that with Tiger. I’ve never talked to a player who had a better understanding of what we do in the military. Never.”

“Six runner-up finishes. It’s mind-boggling. Some of it has to be just bad luck. And some of it is more than that. When you think about Brooks Koepka, you can see how his mind works: the more that’s going on, the more he can focus. Right? And a U.S. Open has a lot going on. The crowds, the tucked pins, the rough, the trophy. That’s tough for Phil, because he’s not like Brooks that way. He sees everything. It’s like Comm Jam, as we say in the Air Force. Like a communication overload. There’s too much stuff going on for how his mind works.

“There’s another term pilots use, Pilot-Induced Oscillation. That’s when a pilot is doing so much there’s like a mental storm in his head. That’s how Phil looks to me at some of these U.S. Opens. Like he’s thinking too much about everything. If you saw him when he was being interviewed by David Feherty, on his show, you could hear what’s going on in his head. Some of those answers Phil gave, you can see he’s thinking about everything. And the real edge is to not overthink. It’s the opposite of a Comm Jam. Winning takes a dynamic fluidity. It’s all just there.”

If you want to read more about dynamic fluidity, there’s a new scholarly essay on the internet on the subject under the headline “Neurotransmitter imbalance dysregulates brain dynamic fluidity in frontotemporal degeneration.” It has nothing to do with golf, Phil, Dan Rooney or the military, but if you want to take a look, click HERE.

If you want to read more about Folds of Honor and Patriot Golf Day, click HERE.