What does it take to win a U.S. Open? We asked someone who knows about pressure 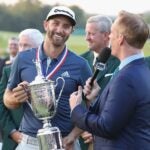 Dustin Johnson talks with Joe Buck after winning the 2016 U.S. Open at Oakmont.

Among civilians — that is, people not formally part of the PGA Tour — there are few people who know more elite players than Lt. Col. Dan Rooney of the U.S. Air Force. There are, of course, 30 players in the field this week for the Tour Championship. Rooney has hoisted a beer, or played a round of golf, or talked about golf and war, with most of them. He has been an inspirational speaker in various Presidents Cup and Ryder Cup team rooms over the years.

This is his high season. Rooney will watch the Tour Championship as best he can. Meanwhile, the annual, national fundraiser he helps run — Patriot Golf Day — will be played over this Labor Day weekend. It is a charitable arm of a charitable foundation called Folds of Honor, a nonprofit group that awards scholarships to military families. Gary Woodland, the reigning U.S. Open champion, talks about Folds of Honor every chance he gets. Rooney talks about Gary Woodland every chance he gets. Over the course of a recent 90-minute phone interview, Rooney mentioned Woodland about 14 times, Jesus Christ about eight and Jack Nicklaus about 18. He also made regular mentions of his wife and their five children, all daughters.

There are few people who are more insightful into tournament golf and golf under pressure than Rooney. He has earned those insights as someone who could break 70 repeatedly when playing well and as somebody who had flow F-16s in combat with lives on the line, his own and others.

Rooney is 47 and he played college golf at the University of Kansas in the Tiger Woods era, though not at Tiger’s level. Rooney never qualified for a U.S. Open, but like many American golfers with a military background, he venerates the event. He recognizes it, as many do, as the most demanding golf tournament in the world to play in, let alone win.

Today, this BB space is dedicated to Rooney’s insights into a dozen or so active U.S. Open winners and what they had that allowed them to win the national championship. On Friday, he turns his attention to two one and onlies: Phil Mickelson, with his six second-place finishes, and Tiger Woods, with his three U.S. Open wins. Mickelson holds a special place in Rooney’s heart. His charity, Birdies for the Brave, has something to do with it. As does Woods, whose life has been shaped immeasurably by his father’s military experience. Then on Saturday, Rooney will offer his insights into two other U.S. Open winners, Arnold and Big Jack.

These insights from Rooney into U.S. Open winners he has known and loved are edited but they are pure Rooney. They appear here in reverse order of their wins.

“He’s an oxymoron as a U.S. Open winner at Pebble, because he won as a long-baller at a course where you don’t have to be. I was with him 12 months before that win. We were drinking. We were talking about his sports psychologist. I said, ‘How much do you pay him?’ He told me. I said, ‘You should fire him.’ Gary Woodland doesn’t need the affirmation of others to make him feel good about his golf game. He has it all.”

“He has hyper-focus when it really matters. He’s like a Luke Skywalker. He’s like a fighter pilot. When the distractions are all around you, it allows him to focus, to block out the distractions. The distractions insulate him. The distractions help settle in on his target. And there is a lot going on at a U.S. Open. At Shinnecock Hills? Playing with Dustin Johnson? If the pressure isn’t on, we’ve seen what happens. He doesn’t play as great. The bigger the moment, the greater he plays.”

“I was with Greg Norman recently. People always talk about his driving but what about his putting game. He called DJ recently and said, ‘You gotta go let me look at your putting.’ They met, I think at Medalist. Greg told him a few things. DJ was excited. Greg was excited. He said, ‘Now I have somebody I can root for.’ Everybody knows that DJ is freakishly talented. But this showed he has the humility to accept help.”

“My take on Jordan Spieth and what he did at such a young age is this: Don’t be a prisoner of common assumption. He won that Masters and then the U.S. Open when he was, what, 21? And people would say, ‘You’re not supposed to do those things, at that age.’ And he had the strength to know that that’s not true. But then when you have that kind of success, you start getting unlimited, unsolicited advice from ‘experts,’ from people who want to be part of your team. We live in a parasitic culture, and Jordan is so nice. And it’s hard to block it all out. When you chase perfection you can take a step backward. Golf has a razor-thin edge.”

“He’s in a special category, U.S. Open winners from foreign countries. They are cut from a special cloth. He led by five through 54 holes and won by eight. That tells you he had the courage to keep the pedal down. All greats can do that. They’re playing against themselves, not the field. One shot at a time and you against you. It’s the attitude of, ‘Nobody can beat me if I’m my best self.'”

I very much had the feeling that Webb Simpson reminded Dan Rooney of Dan Rooney.