The secret to making long putts, according to Jack Nicklaus and Jon Rahm 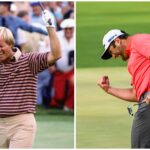 Making long putts is a blend of art and science.

Jon Rahm poured-in a series of brilliant putts on Sunday at the BMW Championship. There were a number of impressive ones, but obviously, his tournament-winning putt on the first playoff hole stands alone.

If you haven’t seen it yet (or even if you have), give it a watch and marvel at Rahm’s talent:

The odds of Rahm making that putt was 4.5 percent, according to Chirp Golf, a soon-to-launch golf gaming app that will allow golf fans to place wagers on golf in real time. Chirp is powered by a proprietary algorithm that considers historical PGA data, player-specific performance tendencies, and real-time course scoring trends. Chirp calculated the odds of Johnson making his putt at 4.7%, which means the odds of both of them making their respective putts, considering their individual playing histories and the circumstances, was just .2 percent.

For some tips, let’s refer to our contributing editor and 18-time major winner — and one of the greatest clutch putters in history — Jack Nicklaus, along with the man he crowned at the 2020 Memorial Tournament: Jon Rahm.

Jack Nicklaus says: It all starts with confidence

Putting is a simple art which is mental above all else. Nicklaus says much of your performance on the greens can be attributed to confidence. And sometimes, confidence comes easily. More confidence means you’ll hole more putts, which therefore makes you feel more confident. It’s a cycle that leads to lots of birdies, and can help players go on prolonged stretches of good results on the green.

“I have had periods in my career where that’s happened to me—where all of a sudden, no matter where I hit the ball, the hole got in the way,” Nicklaus saays. “When you’re really confident about what you’re doing, it happens easily.”

But other times, it’s not easy. You may not feel inherently confident, but through sheer force of will, you push yourself to focus more intensely and execute to perfection. It’s hard work, Jack says, but if you can harness that willpower, it can lead to amazing things.

“Sometimes your best players, they almost will the ball into the hole. Sometimes you have to do it, and it happens,” Nicklaus says. “That’s how they separate themselves from the field. It’s hard, almost impossible, to explain. But sometimes when you are over a 50-footer and you know you have to make it, you really tune in.”

Once you mind is focused, then comes the essential next step: Planning.

When it comes to long putts, Rahm approaches this step by taking a long putt and mentally breaking it into four parts. So, instead of planning for one 66-footer, like he had on Sunday, he pretends he has four separate 16 foot putts. He reads each part of the putt individually, which he says helps him focus on the details of each part.

“When I first stood behind the ball I could see the first three parts of the putt were pretty much steady left-to-right break,” Rahm said of his tournament-winning putt. “Then you get to the big slope on the final section of the putt, and know it’s going to take a quick right and then at the end turn left towards the pin.”

So, in Rahm’s mind, the first three sections were subtly left-to-right, and the final stretch was strongly right-to-left. Once he added all those together, it was back to the same mindset that won Jack so many majors: Determination, willpower, and visualization.

“For people that have seen the movie “The Legend of Bagger Vance,” that 18th putt, you can kind of see the light of how the putt is supposed to go. It is somewhat like that. That’s how I feel. I kind of visualize the ball rolling like that.”

Do you struggle to shallow the club? Try this subtle move in the backswing

Use these 6 exercises to power up your golf swing

How to understand your misses (and why you hit them)