Why this week’s best event is happening across the Atlantic 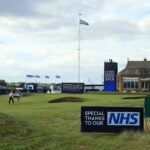 The AIG Women's Open is the best event in golf this week.

Ed. note: Relax, it’s Bamberger Briefly, FedEx-style. This is the third of nine installments that will be express-delivered to this site during FedEx1 (Boston), FedEx2 (Chicago) and FedEx3 (Atlanta.) Previously: a new playoff system and Jim Herman.

With all due respect to the lodge brothers at TPC Boston, where the top-three players were 41 under par collectively through two rounds — the best golf event this week is the Women’s British Open at Royal Troon, on the rugged west coast of Scotland. The Wales Open is also being settled this weekend, named for a country loaded with great seaside golf. But the tournament is played at a soft inland resort course, Celtic Manor, where the Europeans beat the Americans at the 2010 Ryder Cup, by a point. All of us have our own thing that draws us in and for me the starting point is venue. That is, the course. Royal Troon. I’d love to be there now, ski cap and extra sweater in my backpack.

But it’s been fun, this week, waking up, getting the papers off the walkway, starting the coffee and watching the golf. Hearing Lydia Ko refer to her second-round score, 71, as “level.” Under is under and over is over and even is level. You and the course duked it out to a draw.

Except level-par 71 there was like Kevin Kisner shooting 65 at TPC Boston, at the Northern Trust. Go Kis. Ko’s playing partner, Lindsey Weaver of the United States, in Game 35, was pushing her own trolley. Our push cart is their trolley. (A buggy is motorized and there aren’t many over there.) In deference to the pandemic, the women can play without a caddie. There are no spectators. The wind comes and goes. Mostly, it comes. It’s Troon. The first tee is practically in town. Most of the course is hard by the Firth of Clyde and the wind blows off it. Their firth is our estuary, says Merriam-Webster. I don’t get that — it always looks like open sea to me, gray and nasty. Golf in Scotland.

The last men’s Open at Troon was in 2016, when Henrik Stenson clubbed it to death. He played some brick-house golf then. Pick it up, boom! Pick it up, boom! Unusually still days, for the most part, and four days of incredible golf: 68, 65, 68, 63. But links golf isn’t really so much about the boom. It’s about hitting it on the face. When slice spin rises to greet a sea breeze, the breeze wins every time. On-the-face is the best defense. There was no men’s Open this year. The great championship was supposed to be at Royal St. George’s, in Sandwich, England. It’ll be there next year instead.

My first Open was in 1985, at RSG, when Sandy Lyle won. I rented an attic bedroom for the week and caddied for an American player on his honeymoon, Jamie Howell. He was the medalist in the 36-hole qualifier at the course next door, Royal Cinque Ports. In the championship, the wind was so strong at one point we could almost not walk through it. The golf bag on my back was like a sail. At the house where I was staying, old, creaky and comfortable, with a view of the sea, tea was served with breakfast and the golf was on the telly. The BBC used to have the golf on from morning to night, Peter Alliss calling the shots. Alliss changed my life, by pointing me to a Scottish golf teacher named John Stark. Stark stirred his tea with a letter-opener. Scottish golfers are not fussy, at least not in my experience.

In 2009, when the Open was at Turnberry, I stayed up the coast at the Marine Hotel in Troon. My friend Neil Oxman stayed there, too. I was covering the tournament. Neil was caddying for Tom Watson, who was 59. Watson had the three-round lead, by a shot. He hits it on the face. If he could win on Sunday, he’d be the oldest winner of a major — by 11 years, and he’d have six Open wins, tying him with Harry Vardon. Neil and I had dinner at the hotel on Saturday night. We sat there for at least three hours. The phrase claret jug was not mentioned. Neither was the phrase champion golfer of the year.

On Sunday, Dustin Johnson will be trying to win FedEx1, the Northern Trust. Good luck, dude. Edoardo Molinari, Franceso’s brother and chasing, will be trying to win the Wales Open. (The brothers were both on the 2010 European Ryder Cup team at Celtic Manor.) Buona fortuna, signore. Sophia Popov, a German golfer who played college golf at USC, is trying to make the Women’s Open her first professional win. If she wins, she’ll be the champion golfer of the year. Yes, it’s an odd year, but the winner at Troon gets the sash.