As Tiger Woods raises a son in golf, might that experience help Tiger’s own game? 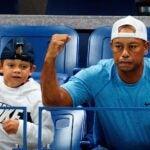 Surely Tiger is teaching Charlie Woods a thing or two about the game of golf, but might Charlie have something to teach his father?

Ed. note: Relax, it’s Bamberger Briefly, FedEx-style. This is the fourth of nine installments express-delivered to this site through the FedEx playoffs. Previously: a new playoff system; Jim Herman; the Champion Golfer of the Year.

When Tiger Woods returned to the winner’s circle in 2018, and then won twice in 2019, he was celebrated for his mental and physical strength, his worth ethic, his attention to detail. But one of the most remarkable aspects of his resurrection has received less attention: He’s been flying solo. There’s been no celebrity golf teacher at his side. Just like the greats from yesteryear.

Yes, there are people who keep an eye on him, including his longtime friend and employee, Rob McNamara, and Matt Killen, a putting expert. But there’s no Butch Harmon in Woods’s life, no Hank Haney, no Sean Foley — nobody he runs to when things get wacky. Tiger owns his own swing, as Jack Nicklaus owned his, as Lee Trevino owned his, as Tom Watson owned his. That was the norm, in their eras.

But the elite players who came after them — your Nick Faldos, your Greg Normans, your Nick Prices — were all closely linked with various gurus. Woods came up in that era. Of course Tiger had his own guy. Just as Mark O’Meara had his own guy, as Ernie Els had his, and Phil Mickelson had his. If you went to a Tour event and stood at the range and watched one of the game’s stars go through his bag, a swing guru was often at his side. On those rare times you’d see Tiger alone on the range, it was a breathtaking sight. But it almost never happened.

I’ve often thought about something Jackie Burke, the 1956 Masters winner, told me, some years ago, about a fundamental weakness in Tiger’s approach to golf. I’ll get to that in a minute, but first a quick introduction to Burke, for you kids out there. John Joseph Burke Jr., 98 on his next birthday, shares a locker with Woods in the Augusta National clubhouse, in the second-floor Champions Locker Room. But he’s not a Tiger-worshipper. He’s not an anybody worshipper. He’s the last of the independents.

Burke founded a club in Houston, grandly called Champions Golf Club, that he made in his image. He’s a wily old man and after the 2019 Masters he had a stinging take on how Francesco Molinari and Brooks Koepka and others could not hit the green on 12 on Sunday: “A marksman could hit that flagstick from 160 yards with a rifle, and those guys can’t hit that green with an 8-iron and a golf ball?”

I went to see Burke in 2004, when he was one of Hal Sutton’s deputies on the Ryder Cup team. I sat with Burke in his office at Champions and he casually said something about Tiger that I had never heard anybody else say. He said that Tiger’s biggest golf issue, one that was bound to haunt him eventually, was that he did not teach the game. He gave no lessons.

I wish I could tell you Burke’s precise words but this is the guts of it: Tiger would never really understand his own golf swing until he started teaching the golf swing to others. It was Burke’s believe that if things go wrong, and you really know your own swing, you can be your own fix-it man, intra-round and between tournaments. But if you don’t, you can’t.

It was memorable. Honestly, I didn’t really get what Burke was saying at the time, but it was memorable. I figured it said more about Burke than about Woods, that it was an insight into how much the game had changed since Burke’s heyday, when many top players still did some teaching. But it stayed with me.

Burke and Tiger came back to mind when Tiger, in a recent GolfTV interview, talked about something Burke shared with him at the 1993 U.S. Amateur at Champions. “One of the great lessons I ever got was from Jackie Burke,” Woods said. “I was playing the U.S. Amateur and he sees me hitting golf balls on the range. I know who Jackie is — he won the Masters, this is his club — and I’m just hitting it everywhere.

“He walks up to me and says, ‘You better keep that ball down, kid.’

“’Well, the longer the ball’s in the air, the longer it has more time to go crooked. So trust me, you need to keep that ball down.’”

Now guys hit the ball way higher today than they did in 1993, but Texas golf, like British Open golf, required a lower kind of flight, so that prairie winds and sea winds didn’t play havoc with your ball. The hot Texas wind blew pretty much 10 to 20 miles an hour all through that Amateur, won by 41-year-old John Harris.

It’s interesting that Tiger called that driving-range exchange with Burke a lesson. Sometimes the best lessons are just talking about the game, the swing, what you want your ball to do. It’s one of the magical things about golf, to take words in your head and turn them into swing positions and have those words and positions influence what you do with your golf ball. Tiger won the next year’s Amateur, then a second in 1995 and a third in 1996.

In 1995, at Newport Country Club, in Rhode Island, Earl Woods (Tiger’s father) and Butch Harmon (Tiger’s swing coach) walked alongside him every step of the way. Butch’s brother, Billy, was the head pro at Newport then. If you ask Billy what he likes best about the game he says, “The ball in the air.” That ball in the air is filled with mystery, but it can teach you a lot about your swing, too.

Through 2018 and ’19 and this year, Tiger’s son Charlie has shown a keen interest in golf. He’s 11 now and from the brief glimpses that have surfaced he has a beautiful, rhythmic, unforced swing and a playful on-course manner. Like his father (and like Jack Nicklaus) he uses an interlocking grip. Charlie’s swing brings to mind Tiger’s own flowing swing both from his amateur days and when he won the Tour Championship in intense Atlanta heat at East Lake in 2018, his first win in five years.

Tiger’s body may be compromised by his various operations, but it’s obvious that he’s been trying to recapture some of what he had as a kid, for naturalism. You’d also swear that he’s been studying Ben Hogan on YouTube. Some of the swings he made at Portrush last year, at the Open in the wind, were right out of the Hogan playbook. Shut at address, feet a little more narrow than usual, lower piercing flight. When Woods talks about the swing, or shots he has made, he sounds like a genius.

Wednesday morning, in a virtual press conference, I asked Tiger if he learned anything about his own swing as he was teaching the game and playing with Charlie. In other words, Tiger as teacher. I was trying to get at the thing Burke was getting at. Tiger didn’t get exactly respond to that, but what he said was interesting.

“There are a lot of different things that we do — we just have fun,” Woods said, talking about his father-son golf. “The whole idea of us going out there and playing is for him to enjoy the game of golf.

“That’s one of the things that I was lucky enough to have had with my dad. When we went out there we played and we practiced and we had just an incredible time together, and I want Charlie to just enjoy it.”

Jackie Burke is a man who still likes to poke the needle, just as Earl Woods did. Burke’s father was a club pro in Houston who finished second in the 1920 U.S. Open. Jack Sr. taught Jack Jr. the game just as Earl taught Tiger the game. If Jackie’s at the Masters in November, I’ll try to ask him if he sees a connection between Tiger’s improved play and his teaching his son the game. If I get anything, I’ll report back what he says. In the meantime, I think we can all make a good guess. It has to be a good thing for both, right? Like the caddies sometimes say, when tossing grass downwind: “Nothing but help.”