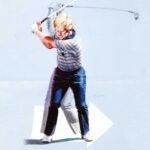 By “rolling” his ankles during his swing, Jack Nicklaus produced frontal plane torque — a key to add yards without worry of going right.

Jack Nicklaus owns six green jackets. But I’m more impressed with his four U.S. Open trophies, indicating wins in the toughest conditions against the toughest fields on a variety of tough courses (for Jack: Oakmont in 1962, Baltusrol in ’67 and ’80 and at Pebble Beach in ’72). They’re proof that his swing could excel anywhere and across multiple decades.

Much of what helped Nicklaus claim these national titles (in addition to his 14 other majors and 73 PGA Tour victories) can be found in his 1974 instruction manual, Golf My Way. It became the inspiration for millions of golfers, many of whom would go on to Hall of Fame careers (Greg Norman included), and, for this northern England native, the basis for much of the fundamentals I teach my students to this day.

If you read Golf My Way (it’s available on Amazon), you’ll learn the story of Jack’s longtime teacher, Jack Grout, grabbing hold of Nicklaus’ short, crew-cut hair on the range at Scioto CC in Columbus, Ohio, as he hit practice balls. It encouraged young Jack not only to keep his head in place but also to “roll his ankles” on both his backswing and downswing. The drill worked. According to Jack, “When your hair was as short as mine back then, it hurt when I moved my head with Grout grabbing hold. I learned pretty quick.”

As simple as this advice sounds, it’s rooted in great functional movement. And today’s coaches have the data to prove it. At my teaching facility in Atlanta, we use GASP dual force plates, which measure the contribution to ground force by each foot during the swing and how these contributions shoot back up to the body for it to generate power. Force plate data shows that by rolling your ankles, as Nicklaus started doing some 60 years ago, you produce frontal plane torque, a force created and used by some of the longest drivers in the game today. To best understand frontal plane torque, think of a Ferris wheel: It spins vertically — basically, a side-to-side motion. The problem for most rec golfers, or those short on power, is that they swing too much like a merry-go-round, spinning rather than shifting.

Fact: Force precedes motion. When Jack rolled his ankles on his backswing, his center of mass (COM) automatically shifted to his trail leg and did so around a steady head (thanks to Mr. Grout grabbing on to his hair). Rolling his ankles toward the target on the forward swing got Jack’s COM over his front leg. The resulting frontal plane torque is what made Nicklaus one of the most powerful drivers of his generation. And while many swing pundits peg Jack as a fader of the ball, his ability to produce frontal plane torque ensured he rarely sliced.

The lesson: Do what Jack did. Roll those ankles! (Even a slight roll will do.) Think of your backswing and downswing more as a Ferris wheel instead of a merry-go-round. That means more shifting, less unnecessary turning. You’ll add power. And for slicers, you can thank me (and Jack) later.

This article is the latest installment of the Golden Rules series, produced by Jack Nicklaus in association with Generational Group. Read more about the partnership here.