3 things to know after Round 1 at the ANA Inspiration 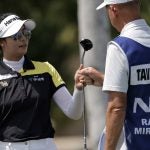 The opening round of golf’s first major is officially complete after a compelling day at Mission Hills.

RANCHO MIRAGE, Calif. — The opening round of golf’s first major of the year is officially complete, and we are one step closer to the next player taking their leap into Poppie’s Pond.

Conditions were close to perfect for Round 1 and many players took advantage of the optimal scoring conditions. And just because there no fans on site for the 50th edition of the ANA Inspiration, that doesn’t mean there will be any lack of dramatics (especially if last year’s finish is any indication).

Here are three takeaways from the first round at Mission Hills.

Michelle Wie West has not made a start in a major championship since 2019, but you’d never know it looking at the leaderboard after Round 1. She made four birdies and just two bogeys during the opening round on Thursday, and she finds herself T16 going into Friday.

Wie West’s round was a clinic in scrambling as she put herself in some “pretty interesting spots” throughout the morning. Despite some loose ball striking she was able to scramble her way to an excellent start to the 2021 major season.

2. Surprise at the top

Patty Tavatanakit was nearly flawless in her opening round at Mission Hills. The 21-year-old rookie did not card a bogey during the first round and posted a six-under 66 to take a one-stroke lead.

“It was a pretty calm and relaxing day today,” Tavatanakit said. “I just stuck to my game plan and didn’t get too greedy out there … I was just being really patient, and I was waiting for putts to drop, and they did on the back nine.”

Her back nine included birdies on Nos. 13, 14 and 15 before she finished off the round with an excellent birdie on the risk-reward par-5 18th. It’s always nice to play a round without making a bogey, and Tavatanakit made that a reality today.

Temperatures have been relatively mild for the Coachella Valley thus far this week, but don’t expect that to last. The weekend forecast shows highs getting into the triple digits, similar to the oven-like conditions players faced last September.

Read here about how players plan to beat the heat.