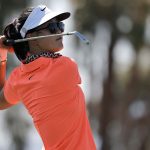 Despite hitting the ball all over Mission Hills Country Club, Michelle Wie West was able to grind through her opening round and remain in contention.

RANCHO MIRAGE, Calif. — If you saw Michelle Wie West’s scorecard, you wouldn’t know she was making her first start in a major since 2019. Four circles, two squares. Add them all up and it made 70. Two under. A solid start to golf’s first major.

Watching Wie West play though, you could see hints of rust. She explored the property with her tee shots and missed some makeable putts coming home.

There are no pictures on the scorecard, but watching Wie West’s round meant seeing a seasoned competitor get used to the high stakes of top-level golf again.

That meant elevated expectations, like the self-talk after a pulled drive on No. 6 that flirted with the hazard (“Oh Michelle!”). It meant disappointment on Wie West’s face when her beautiful approach on the par-3 8th hole bore no fruit. But mostly it meant seeing Wie West make more birdies than bogeys and charge into the top 10 on the first day of the ANA Inspiration.

“I’m just happy to see my name on the first page of the leaderboard,” Wie West said after the round. “That’s really special to me. Been a long time since I’ve seen that.”

It’s been 1,124 days, to be exact, since Wie West’s name finished the week atop the leaderboard. A lot can change in 1,124 days. For Wie West, her entire world is different.

She’s gained a name after marrying Jonnie West in 2019, and she’s become a mother, too. The world of professional golf is different as well: There are also no fans on site to scream her name or cheer on her comeback.

One thing hasn’t changed though — her ability to gut out a score when she doesn’t have her best stuff. During Round 1 of the ANA Inspiration, that grit was full display.

Wie West’s round got off to a ho-hum start in the cool morning air when she made bogey at No. 10 (her first hole). It seemed like a bad omen; would her return to major golf go much the same way as her 81-74 missed cut in a tune-up last week? But thanks to a near ace on No. 14 — and some crafty saves to erase those errant shots — she made the turn at level par.

As the weather started heating up, so did Wie West’s putter. She rolled in a long birdie putt at the 1st hole, added another at No. 2 and made it a turkey at No. 3 to reach three under. The name “Michelle Wie West” flashed onto the first page of the leaderboard. Solo second.

But just as quickly as she gained momentum, it was gone again. Those long putts that were finding the bottom of the cup in the middle of her round stopped falling and the wayward shots were more frequent. In golf-speak, she had to start grinding.

“[I] put myself in some interesting spots today,” she said. “But really proud of how I grinded it out out there.”

Wie West made her first start in this event 18 years ago, at the green age of 13. She finished T9. Since then, she’s become a major champion. She’s won five times on the LPGA Tour. She’s taken a leave of absence from the game. And now she’s returned.

That ability to grind has been consistent throughout.

“I have to say today was a bit like when I was 13: I kind of hit it all over the place,” Wie West said. “But that feels good. I think that’s kind of how I play.”

Conditions are only expected to get tougher as the week progresses with highs for the weekend getting into triple digits. That grind-it out-attitude will be necessary if she hopes to make her first jump into Poppie’s Pond on Sunday.